For much of the 20th century, private property covenants, zoning laws, and federal policy shaped spatial segregation patterns throughout the Minneapolis-Saint Paul metropolitan area. Two key types of policies are likely to have significantly contributed to the racial segregation that persists in the Twin Cities: racial covenants and federal mortgage-risk zoning.

In the early 20th century, to restrict the residence and use of properties by race, home sellers attached racial covenants to property deeds using language such as “premises shall not be sold, mortgaged, or leased to or occupied by any person or persons other than members of the caucasian race.” Such covenants were often promoted by property developers as a way to prevent the declines in home value that were common in neighborhoods that added Black residents.

In the 1930s, the Federal Housing Administration (FHA) classified urban residential areas in terms of their lending risk for the HOLC. The program was developed to stabilize housing markets. The HOLC created residential maps that graded the risk of lending to specific neighborhoods in over 200 metropolitan areas across the country. The racial composition of neighborhoods was a major factor in zone classifications.

Areas with a high concentration of certain minority groups, particularly Black people, were assigned a D grade, labeled as “Hazardous,” and colored red; in those areas, the HOLC discouraged the underwriting of loans and investments. Areas colored yellow were graded C and labeled as “Declining,” blue areas were graded B as “Desirable” and green areas were graded A, for the “Best.” Loans for homes in neighborhoods graded A or B were significantly more likely to be underwritten. Because of the red coloring used to indicate “hazardous” neighborhoods, the HOLC grading came to be known as “redlining.”

Redlining and racial covenants were supported by law and worked together, both directly and indirectly, to restrict where Black residents could live in the Twin Cities. The Minnesota Legislature prohibited the use of racial covenants in 1953 whereas open redlining was not made illegal until the 1970s.

To open the interactive map, click on the image below. The initial view shows the percentage of the 1980 Black population by block, in shades from light yellow to dark blue, for both Minneapolis and St. Paul. This view also shows dark gray outlines around properties that had racial covenants. The covenant data, provided by the Mapping Prejudice project, are limited to Hennepin County, which includes Minneapolis and some of its suburbs, but not St. Paul. 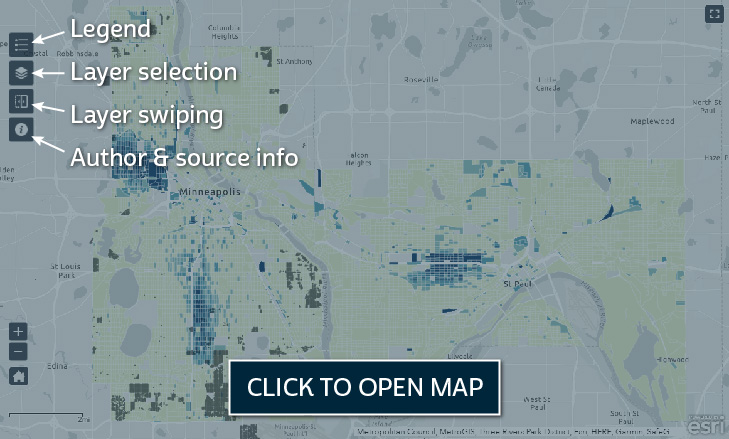 Clicking on a block will pop up a detailed summary of the block’s racial composition along with, for 1980 and 1990 blocks, the median housing value. The icons in the map’s upper left provide access to additional key information and controls. The first icon opens a map legend. The second icon opens a map layer list, providing the option to select which layers are shown. The ordering of layers in the list corresponds to the drawing order; a layer higher in the list will be drawn over the top of any lower layers.

The layer list includes block-level percentages of Black residents for each census year from 1980 to 2010.1 The block boundaries and census data for these layers are all from IPUMS NHGIS. (The newly constructed 1980 boundaries are not yet publicly available.) The layer representing the HOLC zones is from the Mapping Inequality project.

The third icon in the upper left turns on “layer swiping,” which adds a bar to the map that you can drag back and forth to reveal or hide a selected layer. To compare distributions of Black residents in two different years, first make sure that only those two years are selected in the layer list (the second icon); then turn on layer swiping and choose the upper layer (the earlier year) as the “swipe layer.” The map initially has the 1980 and 2010 block layers selected, enabling a comparison of those two years.

Using the layer swiping with different combinations of block layers is a good way to examine how the distribution of Black residents has changed over time. The image below also provides an overview. 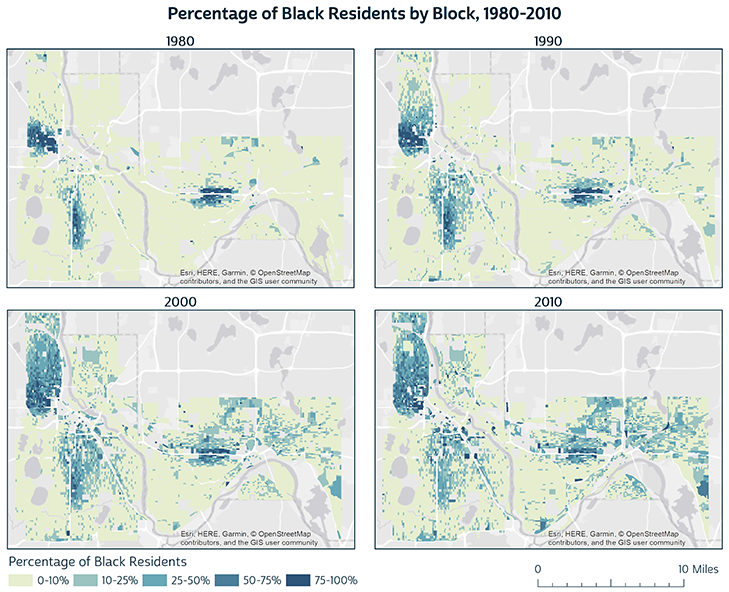 To what extent might these segregation patterns reflect the continuing effects of the discriminatory covenants and zoning of the past? Since there are many forces that may contribute to persistent segregation, the data presented here do not by themselves allow us to distinguish the significance of the various factors or prove causal linkages.. But the fine-grained spatial detail of block-level data enables us to identify some potential lasting effects based on how block-level racial composition corresponds to the exact boundaries of racial covenants and HOLC zones.

By aggregating the block data, we determined the Black population of each historical HOLC zone in census years from 1980 to 2010. The Twin Cities’ Black population grew in all zone classes throughout this period, but the growth was largely constrained to the lower-rated HOLC zones. While the proportion of Black residents grew by little more than 1 percentage point in A-graded zones and by 6 points in B-graded zones, it grew by 15 percentage points in C-graded zones and 17 points in D-graded zones. The ratio between the  percentages in D and A zones also grew from 5.2 in 1980 to 7.9 in 2010. These growing discrepancies may or may not be causally linked to the creation and use of HOLC zones, but there has clearly been substantial persistence—and apparently some amplification—of the neighborhood distinctions that the zones were intended to delineate. 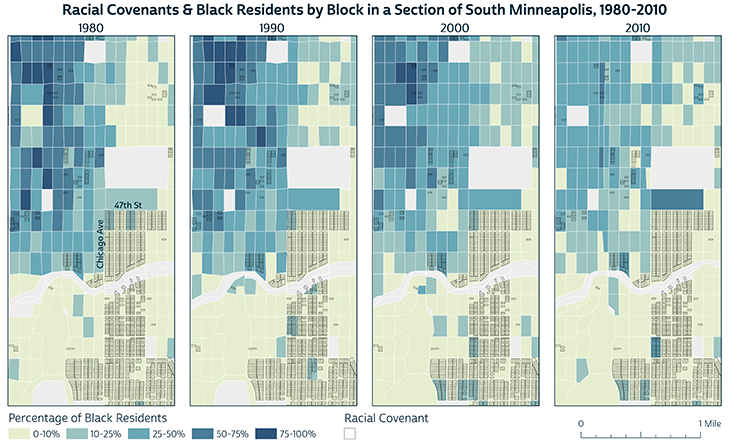 In one case in the Nokomis area of South Minneapolis, illustrated above, the contours of the racial distribution continued to reflect the sharp boundaries of historical covenants for the entire study period. The largest agglomeration of adjacent covenants in Hennepin County stretches southeast from the corner of Chicago Ave and 47th St (exactly nine blocks south of the site of George Floyd’s death). In all census years from 1980 through 2010, the blocks immediately to the north and west of this intersection had substantial proportions of Black residents, but in nearly all blocks to the southeast, the proportions of Black residents remained very low. The covenants here no longer have any legal standing, but the block-level racial distribution at least suggests that their influence lingers on.

As NHGIS publishes 1980 and 1970 block boundary data in the coming years, we anticipate the research community will find them a key resource for studying fine-grained spatial dynamics in urban population and housing. Our case study shows that, in conjunction with new data resources provided by the Mapping Prejudice and Mapping Inequality projects, historical block-level data can be especially valuable for investigating long-term trends in racial segregation and the effects of discriminatory housing policies. We look forward to seeing more research using these resources.

1 Two factors complicate direct comparisons of race data across this period. First, since 2000, block-level race data have been subject to some distortion due to “data swapping,” whereby the Census Bureau would swap the characteristics of some households prior to tabulation in order to protect confidentiality. Due to swapping, some blocks that had no Black residents may appear to have some, or vice versa. The Census Bureau also began distinguishing persons of multiple races in 2000. In our maps and data for 2000 and 2010, “Black” refers to individuals who were Black alone, omitting multi-race individuals, some of whom would have been counted as “Black” in previous censuses.

Frey, W. H. (1977). Black movement to the suburbs: potentials and prospects for metropolitan-wide integration (Vol. 77, No. 40). Institute for Research on Poverty, University of Wisconsin.