IPUMS PMA is the integrated version of Performance Monitoring and Accountability 2020 (PMA2020), a series of high-frequency, nationally-representative surveys about family planning, water, sanitation, and health in 10 FP2020-pledging countries. Funded by the Bill & Melinda Gates Foundation in partnership with a team at Johns Hopkins University, the PMA2020 data series is comprised of household, female, and service delivery point questionnaires for monitoring progress towards FP2020 goals.

This release includes the harmonized data from the household and female questionnaires, with around 1000 variables for 39 samples in 10 countries between the years 2013 and 2016.

Later this year, we will release harmonized data from the service delivery point (SDP) surveys, which provide data on health facilities, such as hospitals or clinics.

We will also continue to release new female, household, and SDP samples and variables as the data become available, including variables from special topic modules, which may appear only in a subset of samples.

Like the Demographic and Health Surveys (see IPUMS DHS), PMA2020 data include information on family planning and health indicators for adult women. When possible, IPUMS PMA uses the same variable names and codes as IPUMS DHS to facilitate comparisons.

At the same time, the PMA2020 data are unique. The more streamlined PMA surveys are administered every 6-12 months to better document rapid change. PMA2020 data aim to fill the gaps in the family planning literature, for example, by asking women why they stop using family planning, and by gathering information directly from sources of family planning services to better document the effects of stock outs and other accessibility issues. The PMA2020 surveys also include new topics, such as menstrual hygiene management.

Here’s a basic example of an analysis using PMA data: 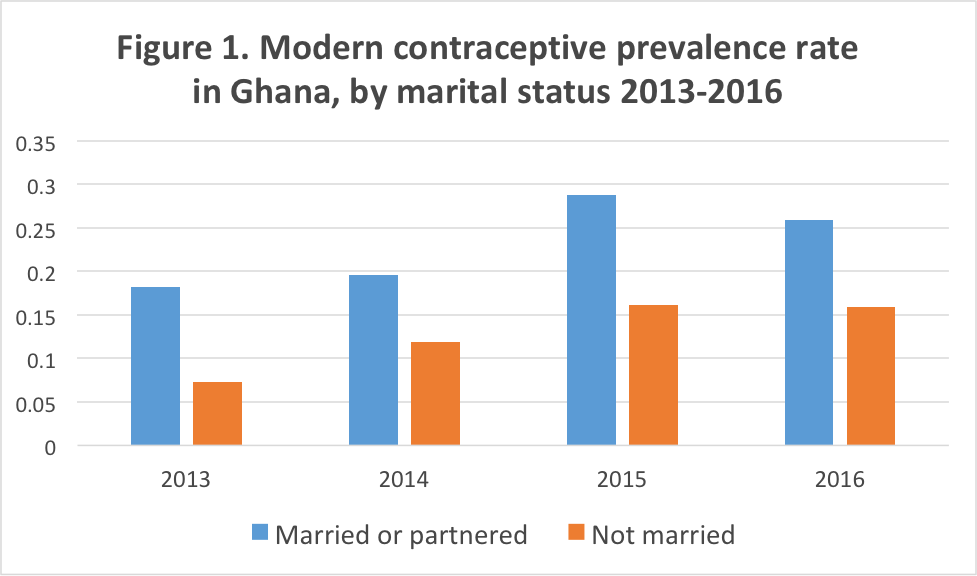 As you can see in Figure 1, IPUMS PMA data can be used to analyze trends in family planning indicators over time. We find that, in Ghana, there has been an increase over a relatively short period in the use of modern contraceptives, and married or partnered women are using modern methods at higher rates than non-partnered women. This is only a basic example of how IPUMS PMA can be used to study family planning use.

Let us know if you have any questions via our Twitter handle @ipums or our User Support team at ipums@umn.edu.