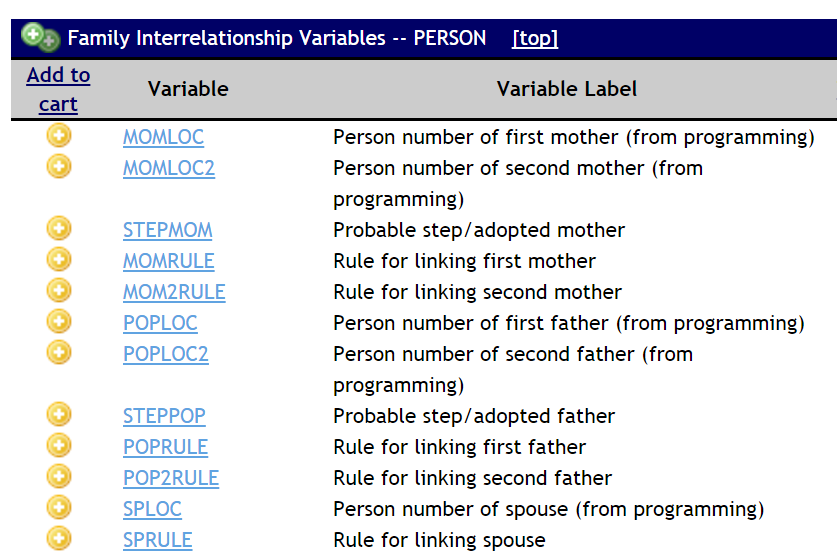 IPUMS has updated the family interrelationship variables in IPUMS CPS and the Integrated Health Interview Series (IHIS) to include same-sex and cohabiting couples. The updated variables dramatically reduce research barriers for those interested in this family and household context.

IPUMS family interrelationship variables indicate an individual’s probable spouse and parents in a household and calculate derived variables such as the age of an individual’s eldest child. Additional characteristics can be attached in the extract system.

The updated variables will be added to ATUS-X and modern samples in IPUMS USA later this year.

MPC staff tested how many heterosexual people are erroneously identified in same-sex couples. Occasionally survey and census data erroneously report the sex of one member of a different-sex couple, causing this couple to appear to be a same-sex couple. In the 2013 and 2014 surveys, the IHIS sample adult was asked their sexual orientation. In the samples, 87.57% of people in same-sex couples identified by IPUMS family interrelationship variables self-reported being gay, lesbian, or bisexual and only 7.95% report being heterosexual (the remaining 4.5% responded with “I don’t know” or unknown).

The new family interrelationship variables build on the original variables

The previous version of the CPS family interrelationship variables are still available for download via the IPUMS CPS site.

Users can find these updated variables under the “Family Interrelationships” tab (shown here for IPUMS CPS):

IPUMS family interrelationship variables allow users to perform nuanced and in-depth analysis of family and household composition. For example, let’s say you are interested in analyzing the association between a child having private health insurance and their parents’ employment status.

You will add the relevant variables to your data cart, including PHINSUR and EMPSTAT. As you create your extract, you will be given the option to click on the attach characteristics box. 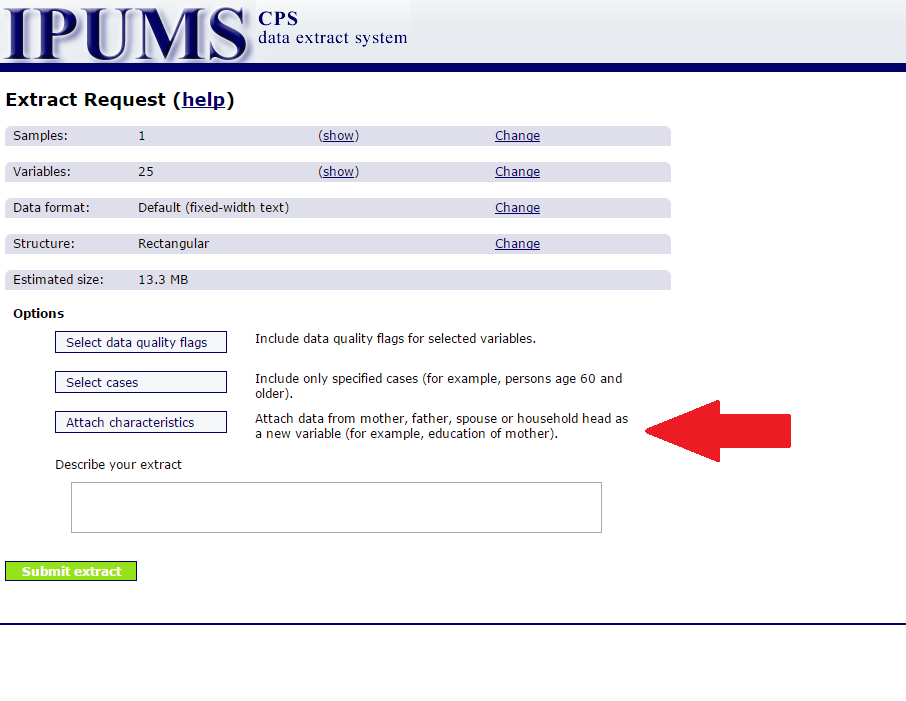 Clicking this will allow you to select the variables and family members of interest and attach these characteristics to the each person’s record. 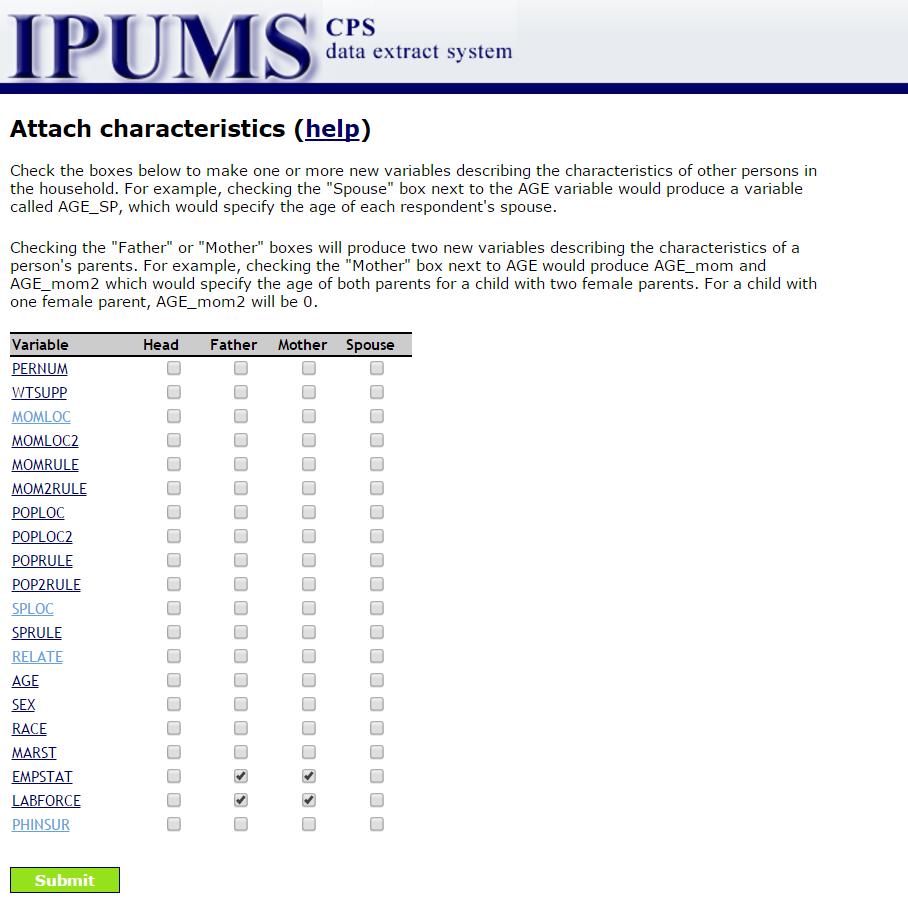 Checking the box under the column titled Mother next to EMPSTAT will add two new variables to your extract named EMPSTAT_mom and EMPSTAT_mom2. These variables will specify the value of EMPSTAT for both parents for a child with two female parents. For a child with one female parent, EMPSTAT_mom2 will be missing. If you want both mother’s and father’s employment status, you can select both the boxes under the Father column and the Mother column. Likewise, checking the box under Spouse column will attach the employment status of the person’s spouse or partner.

When you import your extract into your preferred statistical package, you will see the attached characteristics appear in your variable list (shown here in stata): 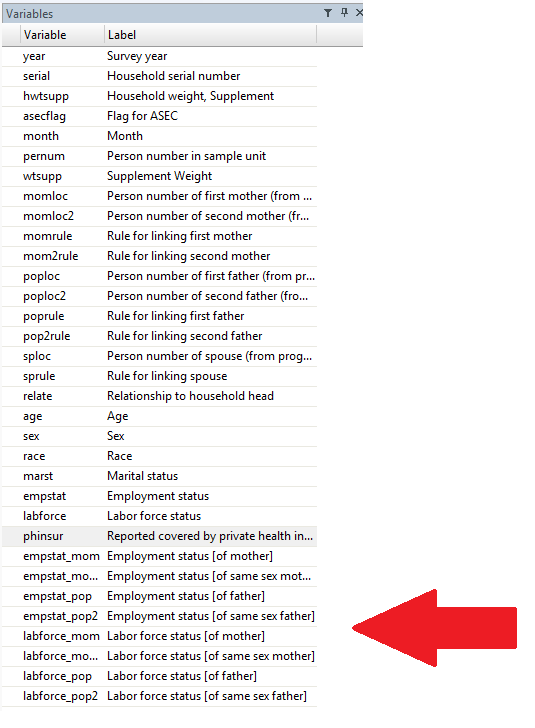 These variables contain the value of EMPSTAT and LABFORCE for the person’s probable parents. For example, in the following household, the householder is out of the labor force and the unmarried partner is employed. These characteristics are then attached to the two children under EMPSTAT_mom and EMPSTAT_mom2. This example highlights the power of including cohabiting and same-sex couples in the family interrelationship variables. Without inclusive family interrelationship variables, it would look like these two children do not have an employed parent. They actually do have an employed parent: their mother’s partner, who may be providing the whole family with private health insurance.