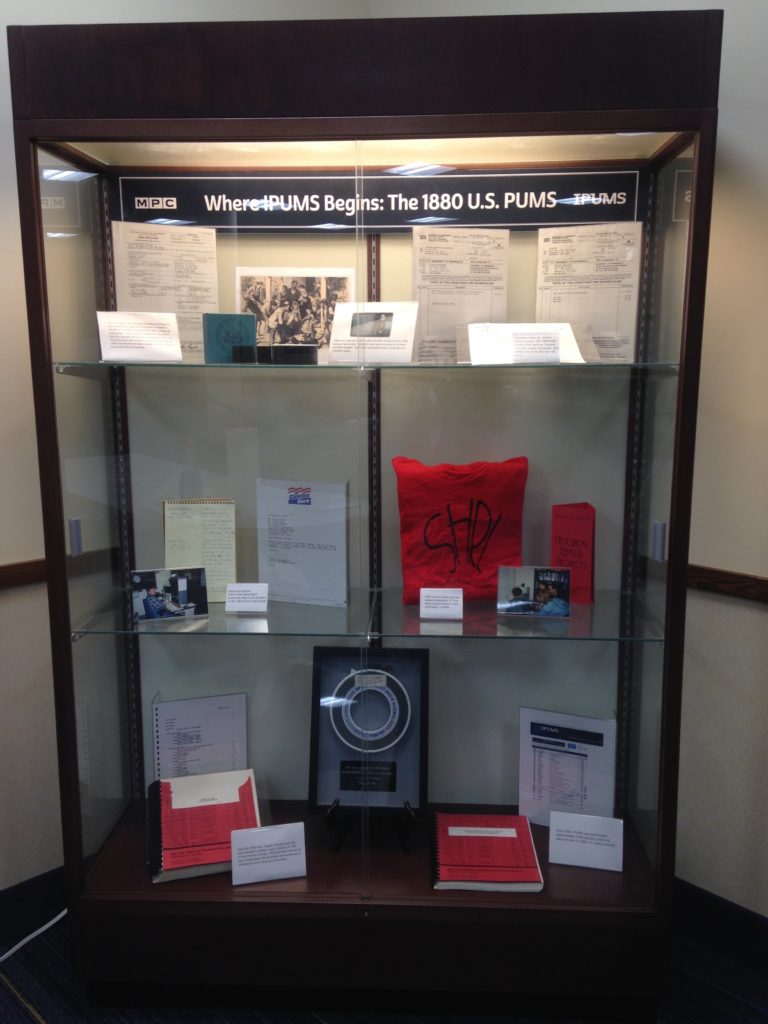 The IPUMS journey to global domination dissemination is being celebrated this summer through an exhibit in the Seminar Room at the Minnesota Population Center.

History Department colleagues Steve Ruggles and Rus Menard submitted a proposal to the National Institutes of Health in 1989 to create a 1-in-500 sample of the 1880 U.S. census of population.  The proposal reviewers requested that the sample density be increased to 1-in-100.  “No problem,” said Ruggles and Menard.  The official grant approval sealed the deal and they and their team were off and running, ultimately entering data on some 550,000 individuals.  The 1880 Census Project required the purchase of the best technology that money could buy to get the job done.  Ruggles wasted no time ordering a 80386 20mhz microcomputer with 1MB RAM, 80 MB SCSI hard drive and 3 ½” floppy disk drive for a cool $2K. (Here is some perspective: the iPhone 7 has 128 GB storage and a camera.)

Ruggles and Menard hired a crack team of data entry operators and graduate research assistants to assist them in making the 1880 public use sample, the fifth public use sample created from an historic manuscript census.  Data entry operators (DEOs), each with a workstation containing a PC and Dukane microfilm reader, worked from the microfilmed 1880 census manuscript (on display).  Using data entry programs created in part by Todd Gardner, DEOs entered data on households that were randomly selected.  Gardner remembers that his program “would generate a random number and then they would take that household, or if it was in group quarters, they would take that individual.  There were rules about who could be accepted.”  Regarding the data entry program, Gardner explained, “We tried to make the computer screen look as much like the census form so that the data entry operators would have an intuitive way to know this entry goes here.”  Long time Minnesota Population Center DEO Dianne Star and her colleagues found the 1880 manuscript census forms so fascinating that they began to keep a logbook (on display) of interesting comments written by enumerators.  “We found 1880 so interesting because they used citizens as enumerators and these citizens were supposed to be your neighbors.  We found the neighbors knew a whole lot about the people they were enumerating and felt free to share it or just to share strange things.”  The DEO team sent a letter to the Clinton/Gore campaign in 1992 when they discovered the town of Clinton Gore, Maine.  Then communications director for Bill Clinton, George Stephanopoulos, responded with his own letter (on display), “I hope your prediction is accurate and we are victorious in November.”

Graduate research assistants worked on “cleaning” the data through consistency checking, creating variable descriptions, and constructing the 1880 codebook.  Dan Kallgren recalled, “We’d take those data sets, run them through Todd’s consistency checking programs, and if there were errors, it got flagged … and we’d have to go back to the microfilm to see if it was an entry error, or no, it actually was that way.  I remember doing that a lot.  It seemed like for years!”  The labor-intensive nature of the work in the small office workspace on the sixth floor of the Social Science Tower of the University of Minnesota fostered an esprit de corps among the graduate research assistants (see displayed photo and t-shirt).

An early plan for disseminating the 1880 PUMS results was to publish a book, America at 1880: A View from the Census.  Only two known hard copies of the book manuscript are extant (see display).  While the manuscript was never published, the ten essays produced for the volume were presented at conferences and a few were published as journal articles.  Before widespread access to the Web became commonplace, the 1880 PUMS data were released via 9 track tape.  An early release of the 1-in-100 subsample data was presented with aplomb at the October 1990 Social Science History Association meeting in Minneapolis (see display).  Fans went wild for the 1880 PUMS.  Since 1999, IPUMS has disseminated approximately 8,499 extracts containing data from the 1% 1880 U.S. census sample.

Do you have an item from Minnesota Population Center history that belongs in the MPC archives?  Contact Diana Magnuson at magnu435@umn.edu.

Please stop by the display if you are in the area, it will be on exhibit through summer 2017.