At this year’s Population Association of America annual meeting, our very own Bob McCaa was given the honor of being elected 2018 IUSSP Laureate. IPUMS director Steven Ruggles introduced his long-time colleague at the awards ceremony. For those of you who weren’t in attendance, here is Steve’s speech.

“Word has it that when Bob was a child in Louisiana sometime around the late 1950s or early 60s, he reportedly built a successful business selling bags with unknown contents for a dollar. A dollar was quite a bit of money then. Somehow, Bob convinced people to buy these bags on the chance they might contain something good. When I arrived at the University of Minnesota in 1985, Bob was hawking discounted off-brand luggable CP/M computers to other faculty members. He sold quite a few of them. He has a gift, and in the late 1990s, he learned to use his special powers for good, never for evil. 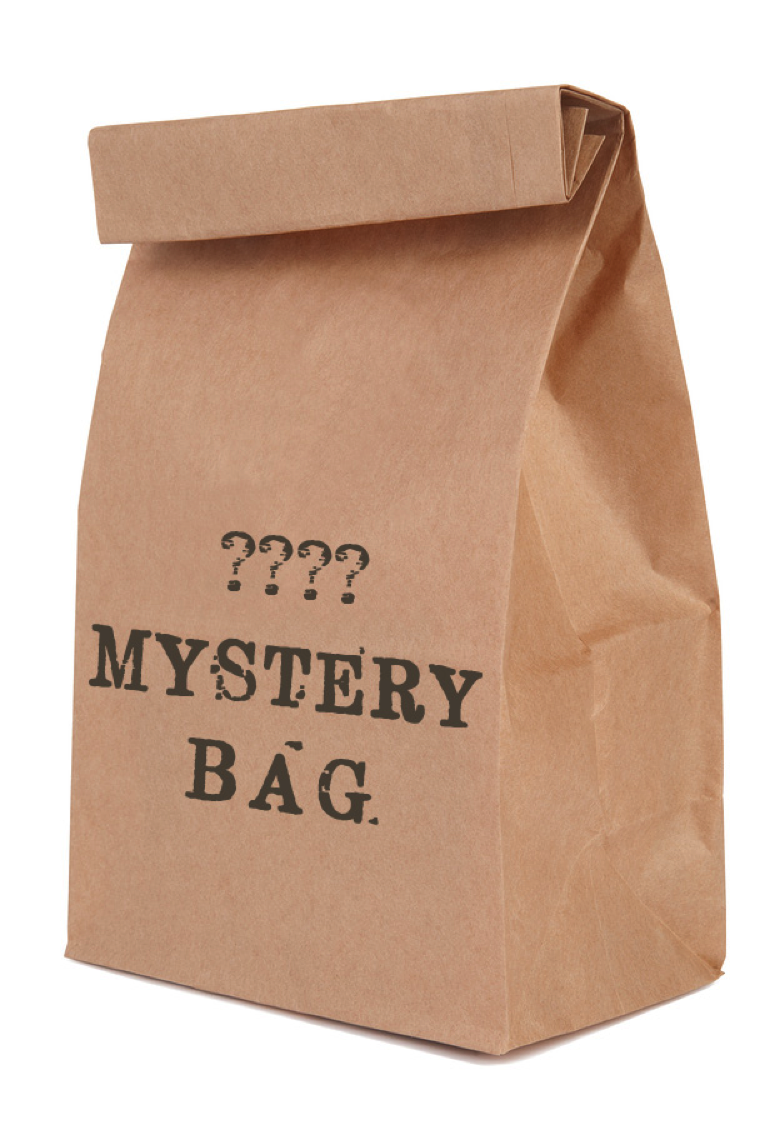 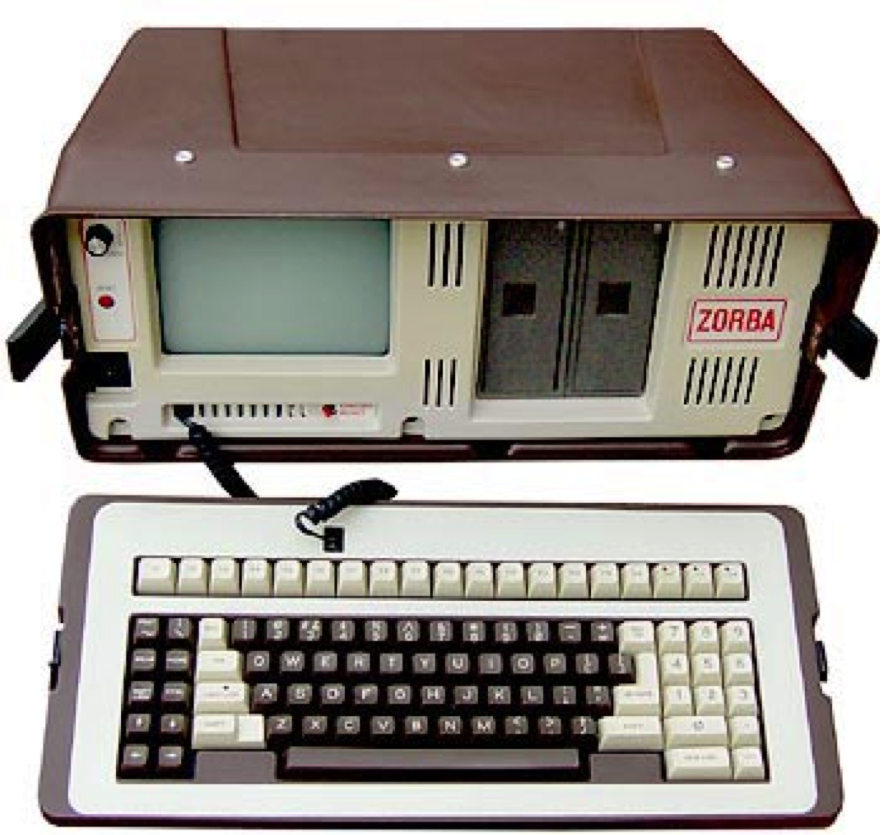 Bob started out as a historical demographer specializing in Latin America. He was good at that. Back in the day, he produced classic articles on marriage and fertility in 18th– and 19th-century Chile and Mexico, the role of smallpox in the demographic catastrophe of the 16th century, paleodemography, the demographic impact of the Mexican Revolution, and the household composition of the Nahua (Aztec) of ancient Mexico.

In the mid-1990s, Bob had an idea that shifted the trajectory of his career and profoundly affected social science research infrastructure. Bob and I were working on the IPUMS project, which was then a harmonized series of microdata samples from nine U.S. decennial censuses. With harmonized codes, consistent record layouts,and integrated documentation, IPUMS made it easy to analyzelong-run demographic change. But Bob had a radical proposal: IPUMS should be expanded to cover international censuses. 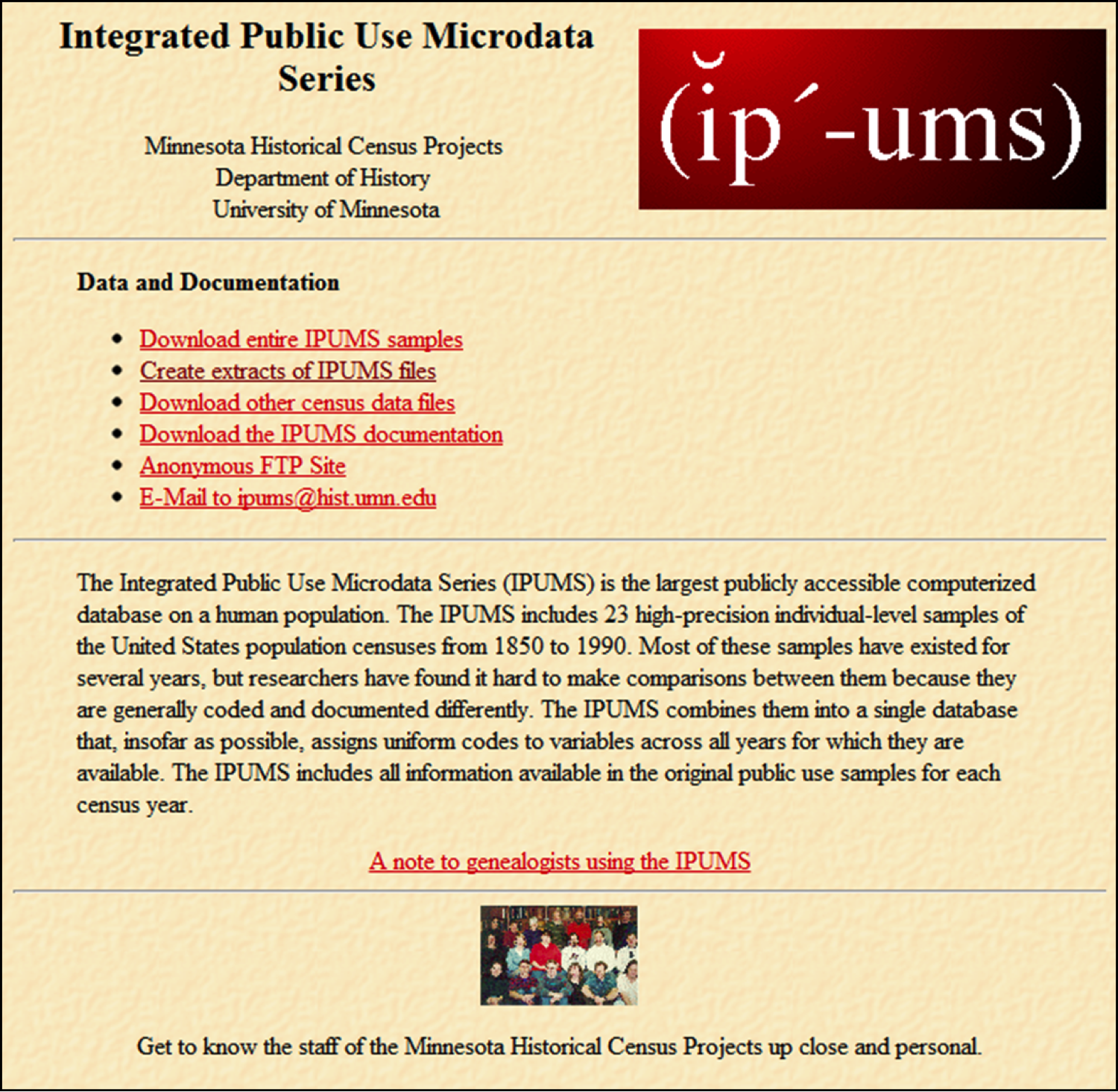 The idea that other countries would let us integrate and disseminate their microdata was frankly laughable. But against all odds, Bob persisted. He could have made the world’s greatest salesman. He combines flattery, charm, and tireless perseverance. He works all the angles, sometimes taking years or even decades, but he almost always succeeds. Wielding IPUMS coffee mugs and a big grin, Bob traveled the world. 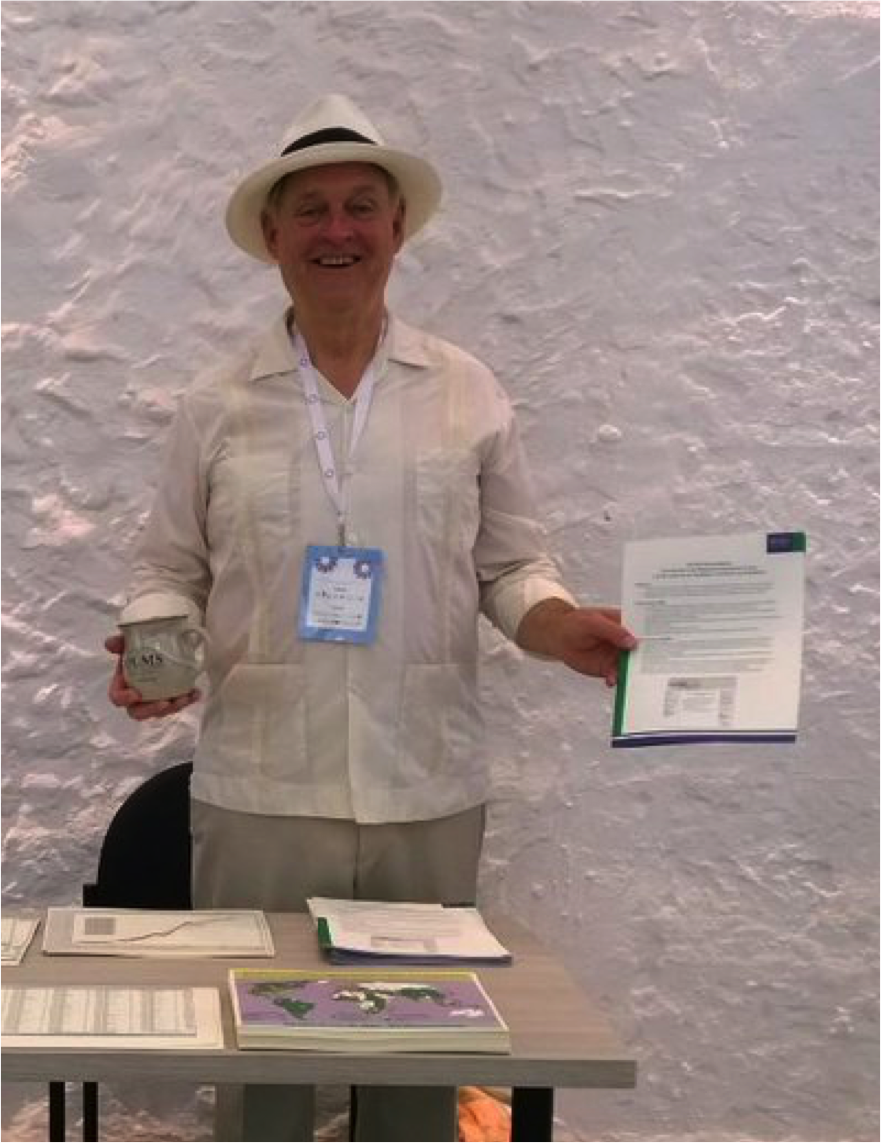 The first breakthrough came in late 1997, when McCaa reached an agreement with the Colombian census authority to create an integrated public-use data series for the Colombian censuses of 1964, 1973, 1985, 1993, and 2000. Bob obtained funding for the project from NICHD, and the Colombian IPUMS microdata project launched in 1999.  Next, Bob concluded agreements with France, Kenya, Mexico, and Vietnam, and, with funding from the National Science Foundation, the IPUMS International project expanded to Europe, Africa, and Asia.

The first image below is one of Bob’s PowerPoint slides from 2003, showing the countries in the first data release, and also illustrating Bob’s remarkable design sense and vibrant sense of color. By 2008, Bob’s map looked like image two. The third is what the map looks like today. Bob transformed the terrain of international census microdata research by persuading 108 statistical offices to allow their census microdata to be disseminated by a third party. 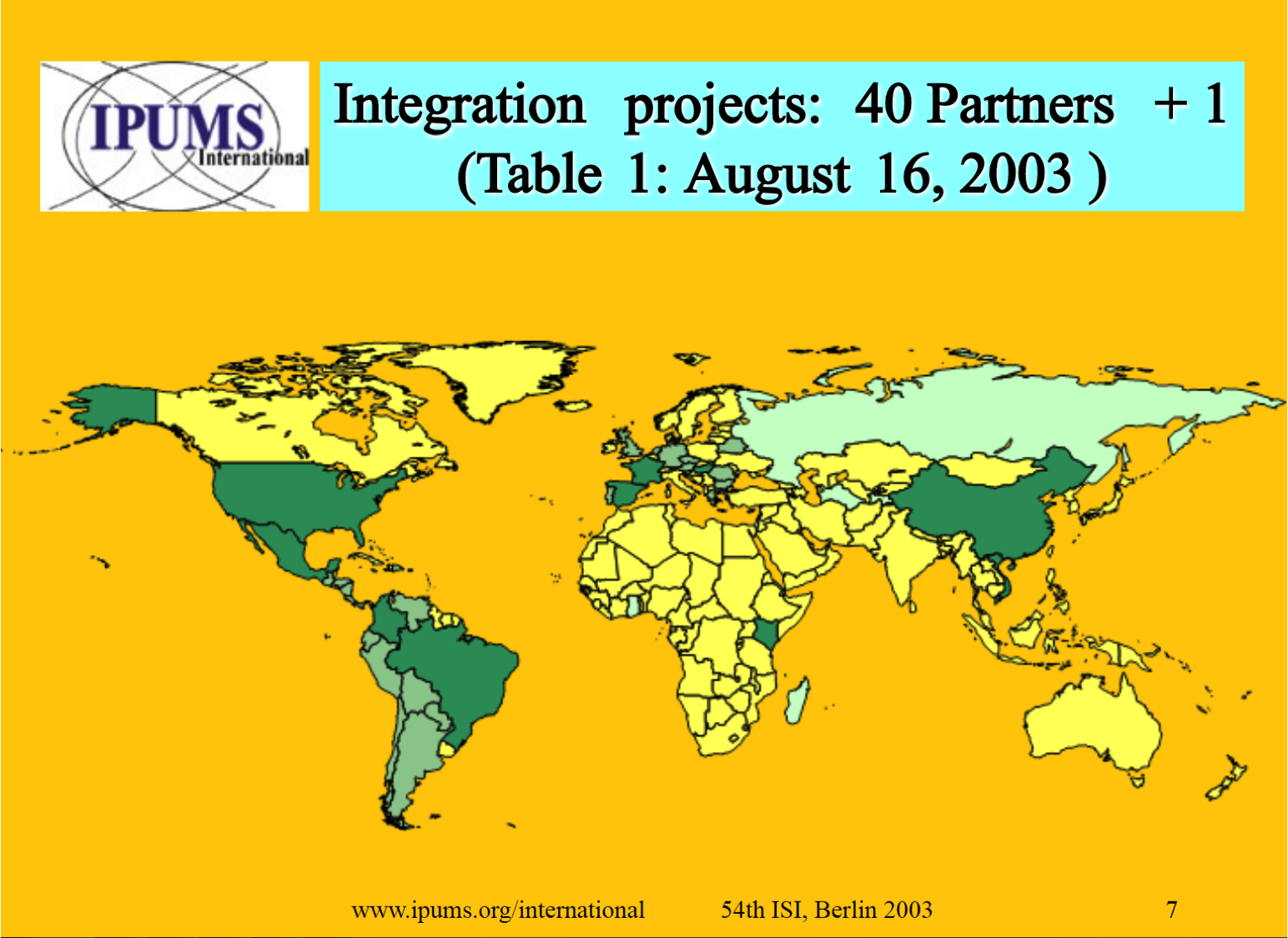 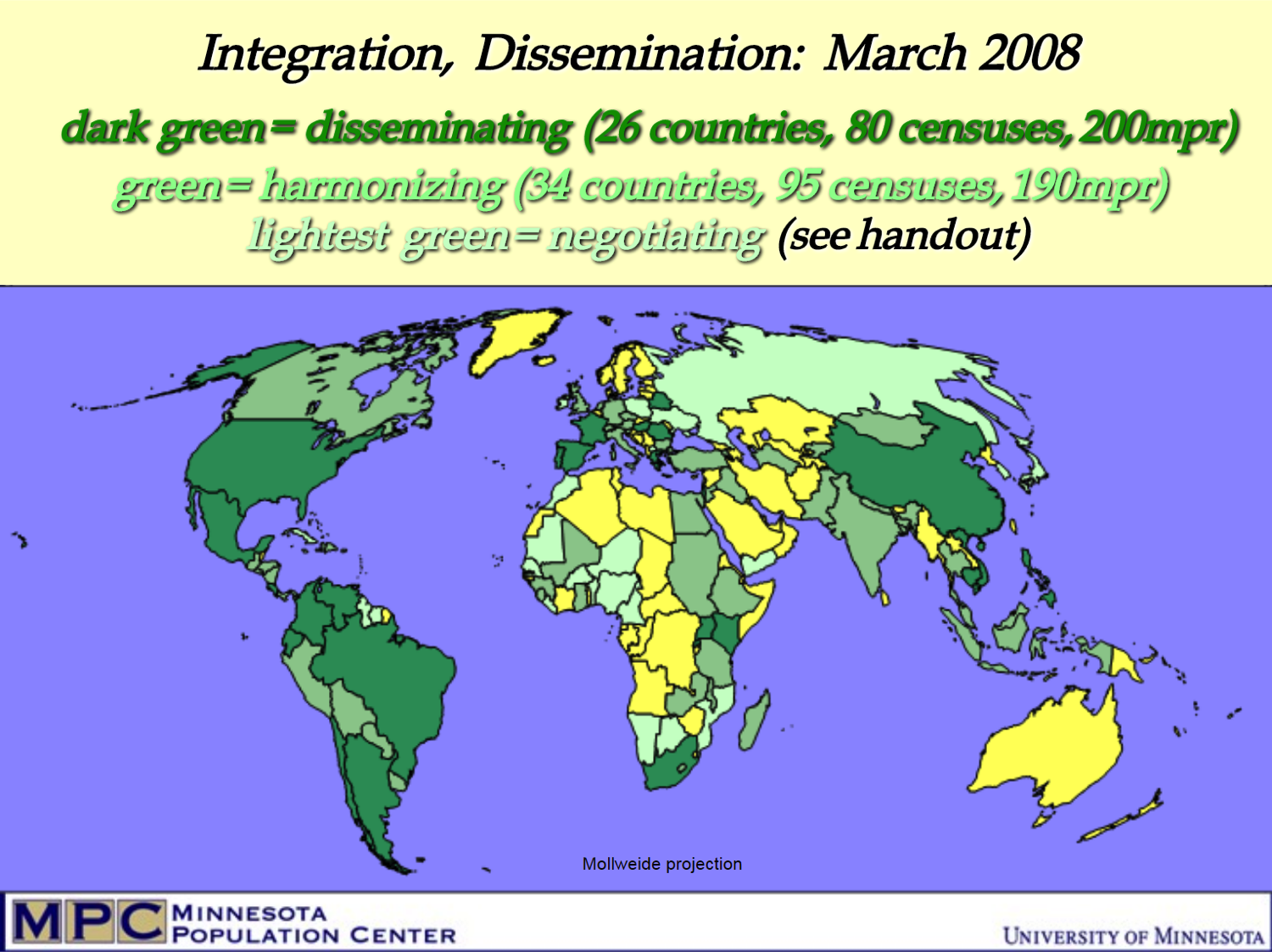 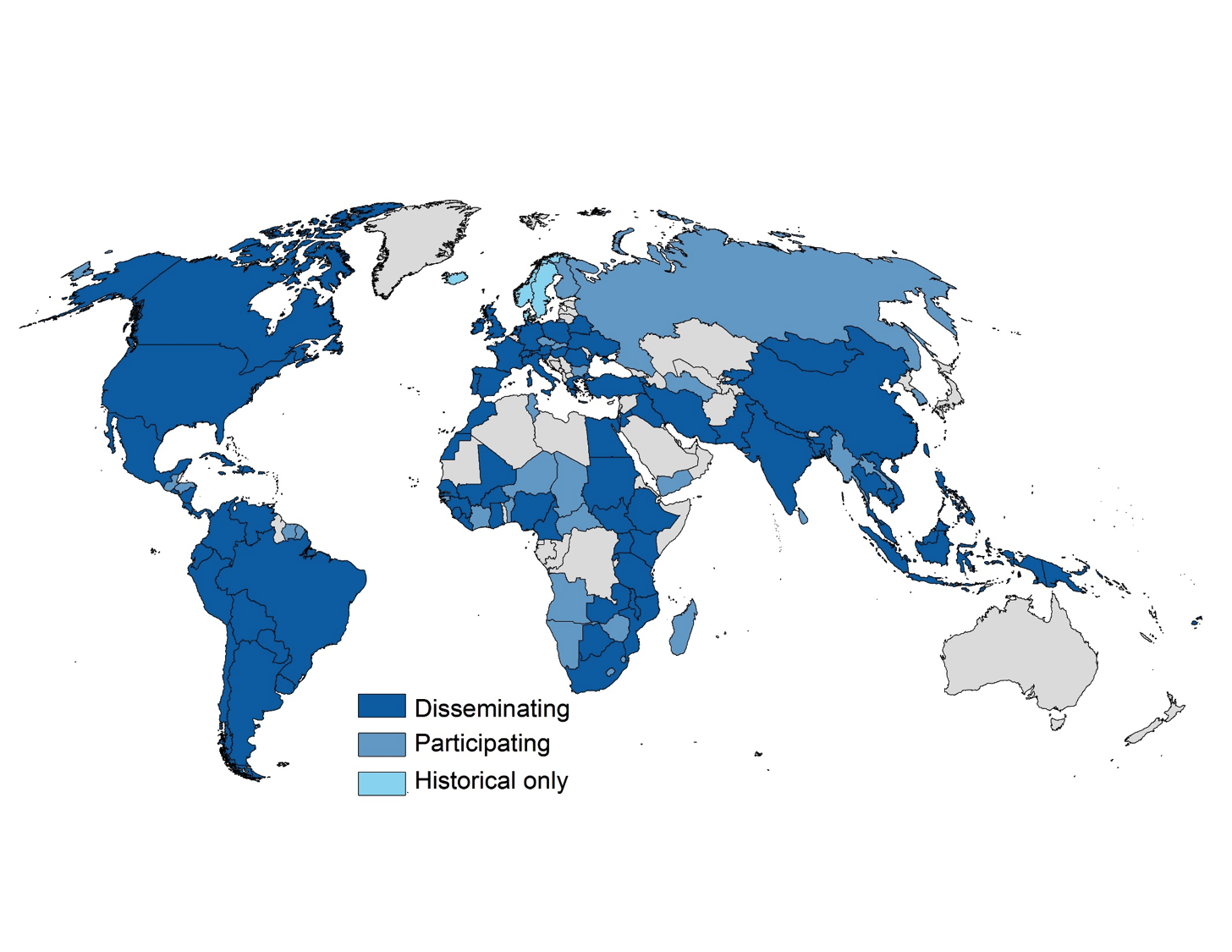 He got all these countries to agree to a single standard license with no special conditions for access beyond the standard approval process conducted by IPUMS. IPUMS International, which has been continuously supported by both NSF and NICHD since 1999, is now by far the largest census microdata archive in the world, with over a billion person records from 500 censuses of 100 countries. These census microdata have had a profound impact on population studies and social science generally. More than 25,000 investigators have created almost 100,000 customized datasets, usually pooling data from multiple censuses. The IPUMS online data analysis system is used about 100 times a day, and on average a new publication using these data appears every 28 hours.

Bob has single-handedly preserved and liberated the world’s census microdata.

Here is the number of microdata records available for public use, showing the year Bob began his work. 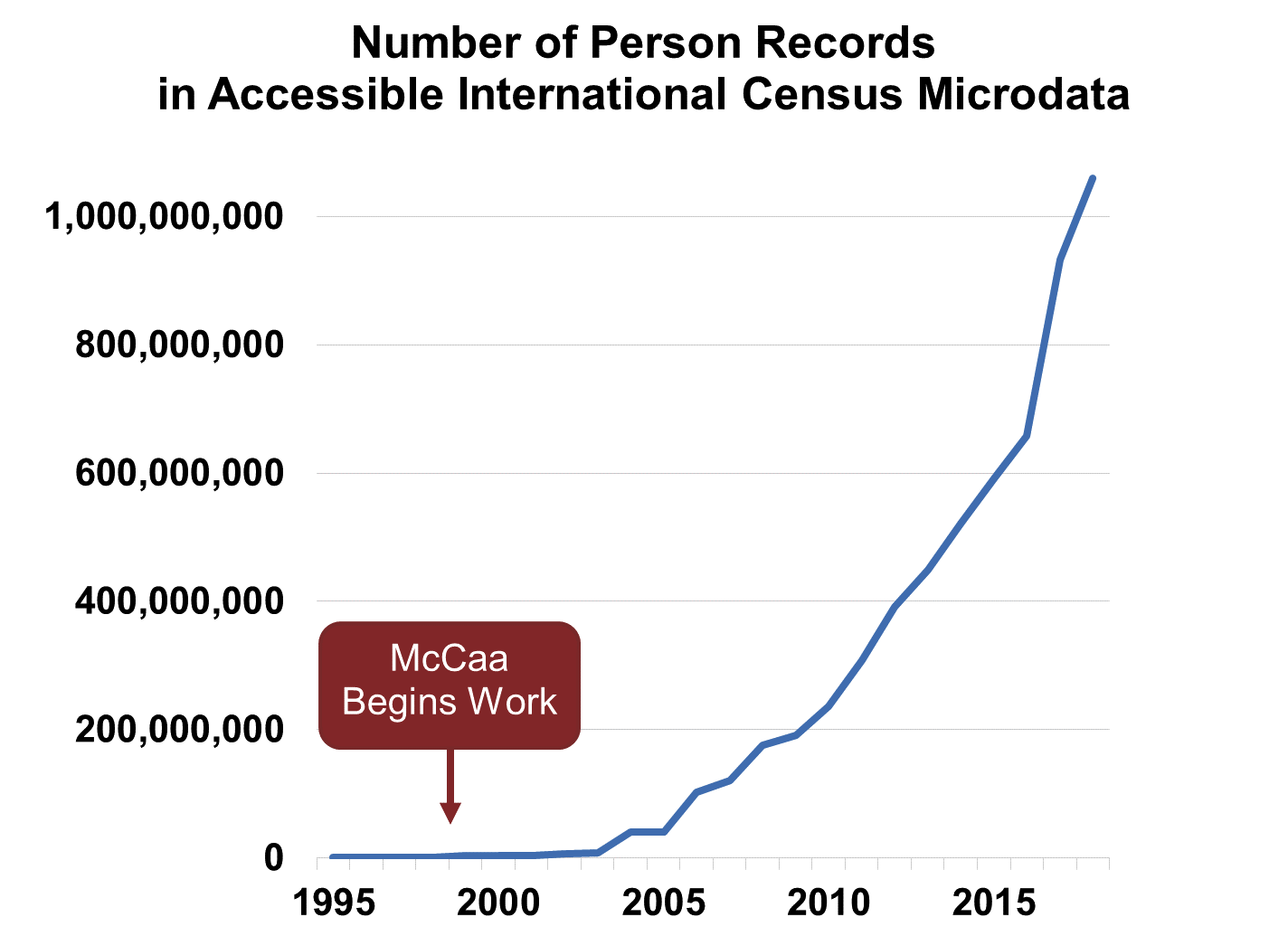 Bob is directly instrumental for the public release of more population microdata than any other person. Due to his dedication to the principle of data liberation, researchers today have access to a massive body of detailed individual-level data. Bob’s work has multiplied the total quantity of microdata available for demographic research by more than an order of magnitude. All these data are available free of charge to researchers and educators around the world through the IPUMS data system. This is an astonishing achievement.

It is hard to overstate the difficulty of what Bob did. Statistical office directors often have little concern for microdata, viewing summary tabulations as the primary product of the census. Many directors required years of convincing, through numerous contacts and at multiple venues, before they appreciated the value of these data for researchers and would entrust an American university-based organization with their national statistical treasures. Bob worked tirelessly, flying millions of miles, attending countless international meetings, visiting dozens of census offices, and building networks of academic and official statistician allies.

Those of us who know him know just how relentless and skillful a salesman he is. Population researchers can be thankful that a person with this rare combination of research and social abilities was positioned to take action at the historic moment when a global microdata revolution proved possible.

Perhaps because of his historical training, Bob takes the long view when it comes to population data. The oldest data are not only as valuable as the most recent but are also at greater risk of loss. Bob’s preeminent contribution might well lie in his commitment to data preservation. As he scours the world, he always enquires about old census data that statistical offices may still retain. When old tapes are discovered that could no longer be read by the office, McCaa has them shipped to where they could be read and preserved. 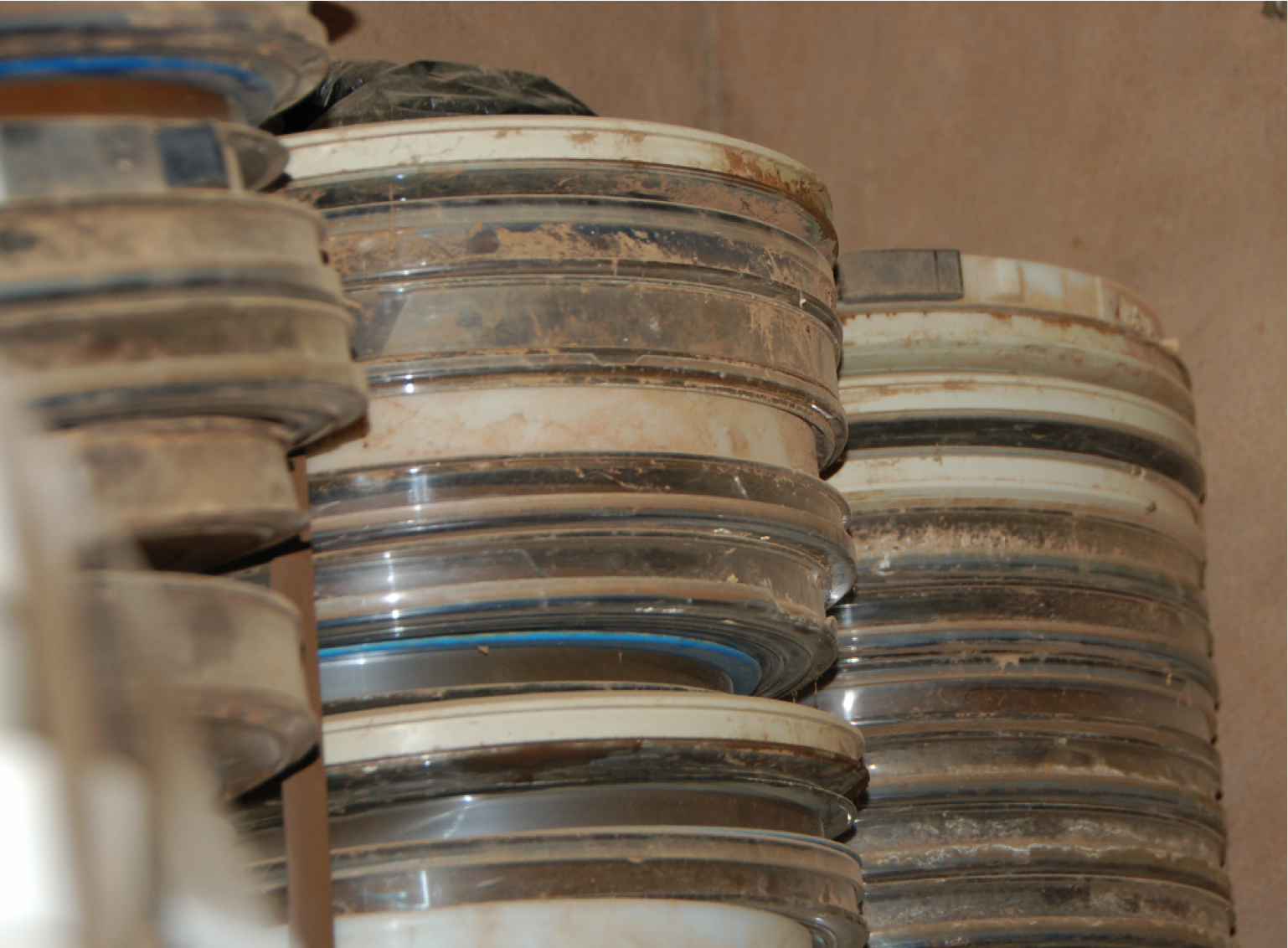 This is the 1973 Sudan census, covered with desert dust. Bob got the tapes sent to Barcelona, and from there to our tape recovery contractor in New York. 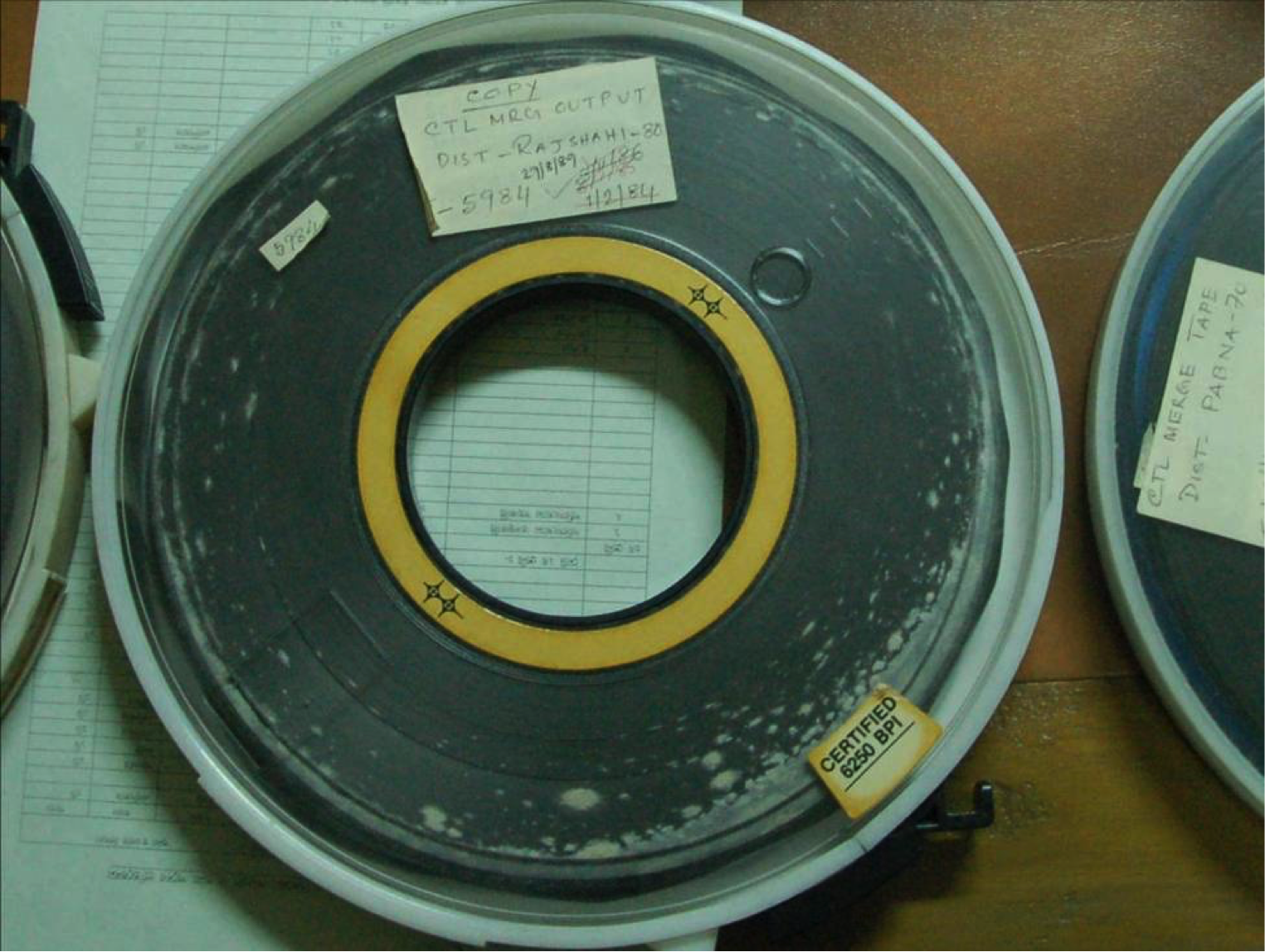 This is the 1981 census of Bangladesh, where the problem was mold. The Bangladeshis would not let the tapes out of the country, so Bob arranged for our data recovery contractor to set up a data washing facility in Dhaka, where local staff were trained to recover the tapes. He has arranged to have entire archives of data migrated to modern media to prevent their loss.

Numerous censuses from the 1960s to the 1980s would already be gone without his efforts, as attested by the frequent requests to IPUMS from statistical offices for copies of the data they once provided but subsequently lost. The older censuses represent the lives of millions of people, many of whom are not captured in other records.

Bob’s efforts have retained the history of these respondents, and have also secured the latest rounds of census data for cutting-edge policy research. Bob preserved and shared a vast body of microdata. This represents a permanent and substantial addition to the world’s statistical heritage. Bob’s prescient vision and tenacious effort has already directly resulted in thousands of research articles, PhD dissertations, and books, and we can anticipate that the ongoing torrent of new investigations will continue to flow for many decades to come. Only a few social scientists have had such a powerful impact on research spanning many disciplines across the globe. He richly deserves the gratitude of the entire social science research community.” 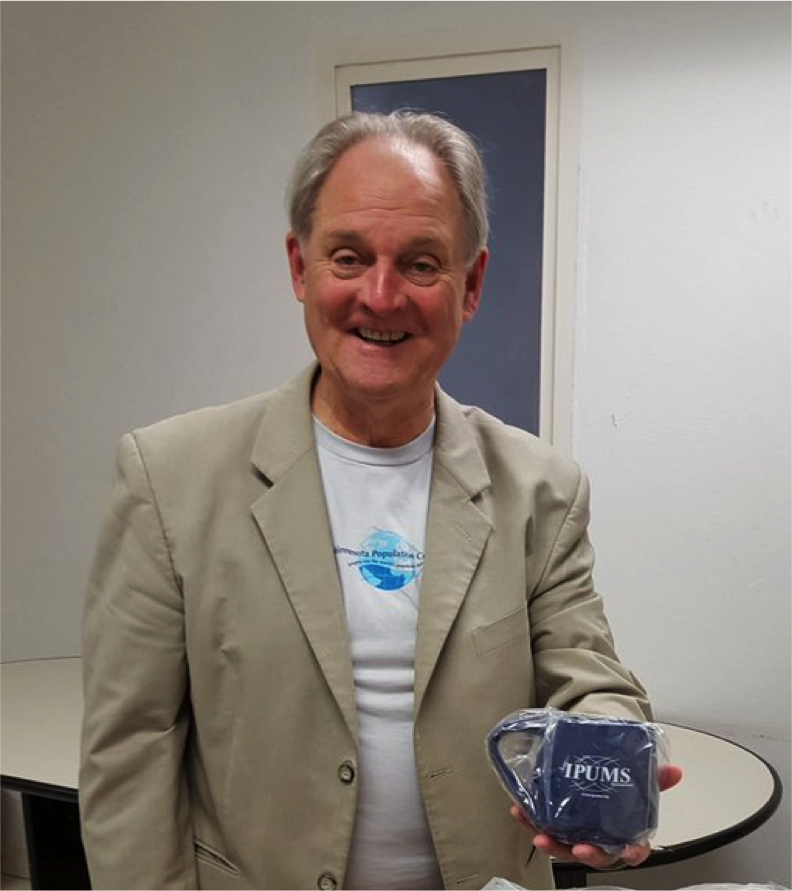