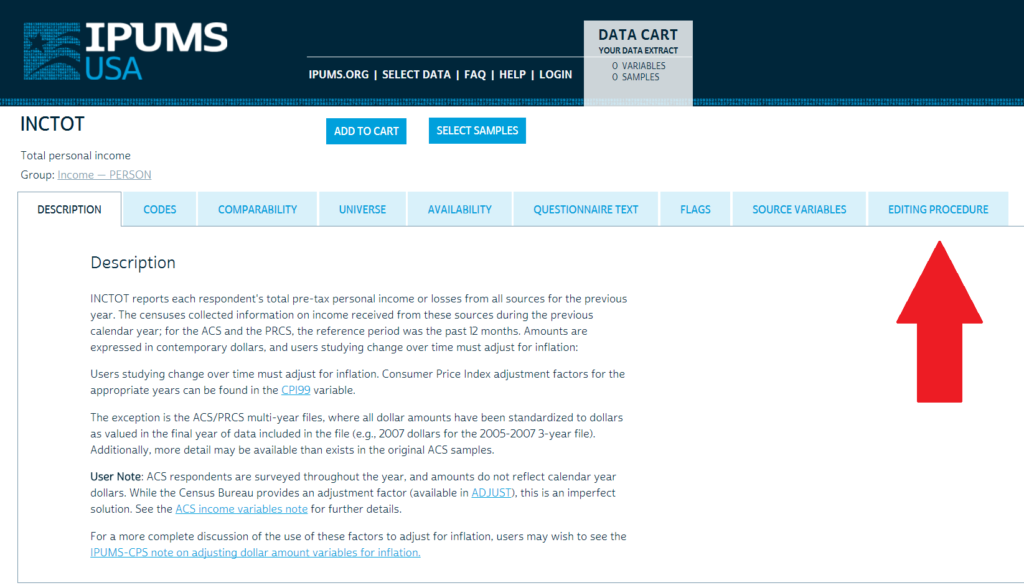 Census forms are sent out to households, filled out by families, and returned. But that’s not the end of their journey. Sometimes a response will be edited by the Census if the form was filled out incorrectly. What responses are edited the most? Why are forms filled out incorrectly? Some people tend to leave them blank if they feel it is an invasion of privacy. How does the Census determine what is true or false? IPUMS users can now access the Census editing procedures for the American Community Survey on the IPUMS website. This feature allows IPUMS users to understand how the Census Bureau edits responses in order to provide more accurate data.

The new “Census Editing Procedures” tab provides more information to users about how Census will edit a variable and also shows common situations where variables need to be edited. It might seem like a simple process to receive information on the forms, but when variables need to be edited Census digs deeper to figure out where the corrections need to be made. They find all the information they can to better infer what the right information should be. To do this the Census uses common demographics, location, and other factors to determine an estimate of what should’ve been filled out on the initial form. The edits are there to clarify or correct any mistakes, which leads to more accurate and reliable information for IPUMS users to access.

With each variable on the IPUMS website the user is provided multiple tabs that give more information or context on the variables, these include availability, comparability, and data quality flags. The new “Census Editing Procedures” tab provides detailed information on how these variables are edited by the Census Bureau. For instance, under INCTOT or total personal income, the new tab has a description of how, why, and who will have an edited value for INCTOT.

Using the new Census Editing Procedures tab can give helpful insight as to why certain variables are edited more than others. For instance, FTOTINC (total family income) was the most edited variable on the American Community Survey (ACS) in the year 2015 at 31% of responses being modified from other respondents’ answers. A person’s FTOTINC will be edited by the Census Bureau for a number of reasons in order to improve the data’s accuracy. A common reason FTOTINC is edited is that a respondent or a family member does not answer all the questions relating to income. For example, one component of FTOTINC is a person’s retirement income (INCRETIR). If a respondent is asked about their retirement earnings but does not answer, a value will be taken from a different respondent that has a similar race, age, marital status and whether they received social security income. The new tab now shows a detailed explanation of all the reasons for editing a value and how the new value is selected.

The graph below illustrates the relationship between the proportion of people edited for Total Family Income and the variable RACE. Black Americans are the most edited racial group for Total Family Income at 39% of respondents being edited. Because FTOTINC is more often edited for black Americans than white Americans, a researcher analyzing racial differences in family income will benefit from knowing when, why, and how family income is edited.

To examine how the editing income variables has changed over time, I went back to the year 2001 to see if there was a common trend of people who had their income variables edited. To increase comparability over time, I focused only on one component of FTOTINC – a person’s income from wage or salary (INCWAGE).

When conducting research, it is important to have correct information for what we are studying. Without Census editing the incorrect information we would not have accurate information for those trying to use the data as a resource. Census’ main goal is to get edited information correct. However, it is crucial for researchers who use the information to know it has been edited by the Census. For example, respondents sometimes leave INCWAGE blank, leading Census to replace it with the INCWAGE of a person with similar demographic characteristics. This means researchers’ estimates of INCWAGE may be less precise than they appear. Importantly, black Americans’ responses are more often edited than other groups, meaning this is particularly crucial for researchers studying black Americans’ income. All the editing procedures for the American Community Survey are now available under the Census Editing Procedures tab. This allows researchers to understand how the data was edited and the impact this process may have on their analysis.

Emily Durkot and Shae McDonough are first year students at the University of Minnesota. They are research interns at the Minnesota Population Center, funded through the CLA Dean’s Freshman Research and Creative Scholars Program. Emily and Shae worked on the new Census Editing Procedures tab during their internship.