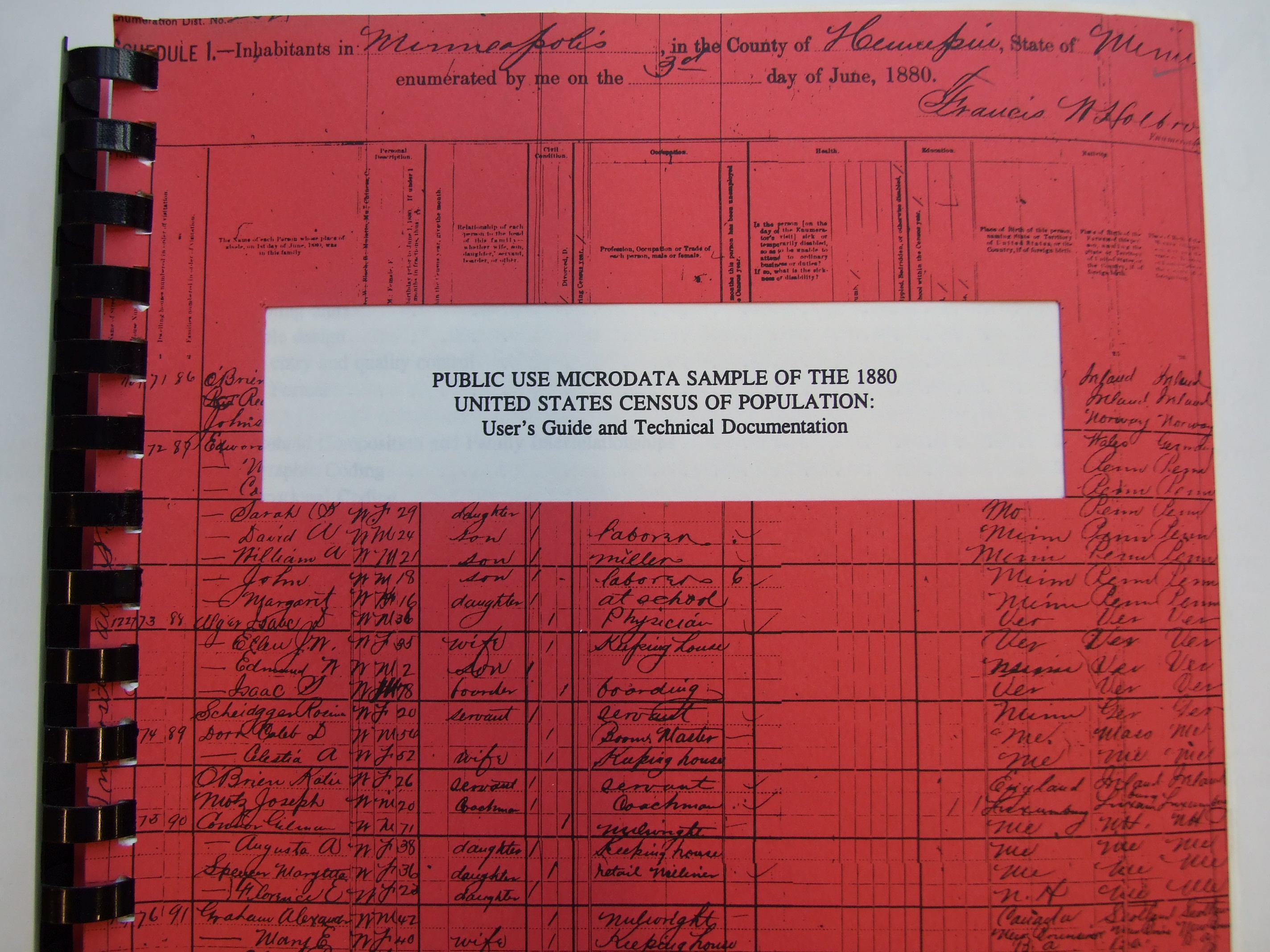 Bethel University Professor of History Diana L. Magnuson is documenting the growth of the Minnesota Population Center. Believing that preserving institutional memory is vital, the Center is supporting Magnuson’s work to capture oral histories of past and present MPC faculty and staff.

This is the first in a three-part series, featuring oral histories from John Adams, Todd Gardner, Dianne Star, and Dan Kallgren which offer a glimpse of the MPC before it was the MPC.

John Adams is University of Minnesota Professor Emeritus and a founding collaborator when the Minnesota Population Center was established in March 2000. Adams reflected on the emergence of the MPC within the context of the development of the social sciences and his own place in this broader story. Adams served as chair of the Geography Department in the CLA at the U of MN (1981-84, 1992-92 and 1999-2005). His knowledge of census data and sampling naturally brought him into contact with Rus Menard and Steve Ruggles also knew a thing or two about census data. Adams continues to provide consulting and enthusiastic support for the MPC, most recently in relation to NHGIS.

And so it was in the context of both the institutional history of American social sciences and the steady advance of the use of data to attest ideas, you know, from psychology at the beginning up through all these other fields – and geography got involved rather early also in the postwar period. By the 1960s and 70s every one of these things was talking about quantitative revolutions and data and measurement and sampling and statistical analysis applied to the study of society in general. As the statistical methods improved, then we start getting first mechanical calculators and then crude computers and then really fancy computers that made it possible to actually do [this work], through the tools of computers and the tools that statisticians provided and the data the census provided and the ideas that the fields were developing. So all four of these things could kind of move together to give us something like a population center.

When I came here in 1960 as a graduate student I was put to work on [a] research project…and I became the census guy.  They needed to know as much as they could about the Upper Midwest region… My job was to assemble demographic data, employment data and industrial data…. Well it turns out I had to figure out how to do that because, in some cases we had the annual data, in some cases we had to invent methods for inferring change when we only had data interspersed over a five-year period….  So that’s what I did for four years, and in the process learned a lot about census …and it turns out that I was kind of a freak because nobody else I knew as much about the census as I did in either economics or in the geography department.  When I finished my master’s degree, then I switched to geography because I had sympathetic advisors there, and the economists didn’t know what to do with me in the economics department, but I carried with me my knowledge of and interest in the census, and over time just continued.

Rus and Steve and I were in a conversation about this stuff, and Steve was happy to find an ally, and so I said, well if you need any help, holler.  One thing led to another, he…started assembling [a] group of people who were interested in census and knew about census, and then Steve took the lead and got started with [the]…1880 project…my office was on the third floor in social sciences and his was on the sixth and so we were back and forth a lot, but that was really how everything got started.

Todd Gardner is a Survey Statistician for the Center for Economic Studies at the U.S. Census Bureau.  From 1990-2000 Gardner worked as a graduate research assistant whose duties focused primarily on programming. His early work for the Center was constructing a computer program for census manuscript data entry. Gardner’s most important contribution to the IPUMS —creating a web interface for users to extract data—was a serendipitous fantasy football diversion. Before Gardner’s innovation, researchers requested the variables they needed, a program was modified or written to produce an extract, then the data burned to an optical disc and mailed back to the researcher.

I did all of the data entry programs … I put in functions that made it easier, like duplication keys, so if a whole family has the same last name, the data enterers could just enter…an apostrophe…and it would duplicate the name from the person above. … And then I did all of the backhand processing and then coding the data.

And then the big thing was after learning how to produce output to a webpage with the fantasy football league [laughs] I then realized that we had a really slick way of distributing the data. … I was learning how to program in Perl and make output to a webpage. … I was motivated to do it because we had a fantasy football league in the grad assistants’ office, and I figured out how to download the box scores from the weeks’ games … and give the proper numbers to each team and make a webpage.

… I remember going in to talk to Steve and I said, “Steve, you know what we could do? We could set up a web interface where someone could go in, choose what fields they want, and do case selections if they wanted to trim it down to just the specific sub-population, and then we’d have a back in program that would read to the IPUMS files and only select the records in the fields that were applicable to that specific request, and then we could put the file in a place where the person could just download it.”

Dianne Star is a data processor at the MPC, working continuously on historical census data projects since January 1990. Star provides an important perspective of the incredibly labor intensive work of data entry and how it evolved.

When we first started working, the instructions were to put everything in as the enumerator spelled it. Well, as you know, the enumerators were atrocious spellers … But, they found the dictionary was getting way too big, so not only did we correct the enumerator’s spelling, but later on as we progressed, we developed abbreviations to make things faster. … We set abbreviations for most every relationship we could think of. We got a good list of the birthplaces that we expected and got abbreviations for them. We looked at the races that there would be in the census and got those coded.

Dan Kallgren is an associate professor of history at the University of Wisconsin, Marinette. From 1988-1995 Kallgren was a graduate research assistant for the Historical Census Projects at the University of Minnesota. During this period, there was no MPC. The Historical Census Projects worked out of the offices in the History Department in the Social Science Tower on the West Bank of the University of Minnesota. Kallgren’s self-described role of “chief scavenger” required initiative and creativity in the “start up” phase of the grant to produce the 1880 public use sample.

[M]y role was just kind of helping to get all the infrastructure together … I had a pickup truck [and], and I remember getting very familiar with where essentially the furniture warehouses were on the U of M campus, and … you just sort of tell these people “Hey, we’re over from the history department. We need some furniture,” and they’re just like “Yeah, help yourselves,” and it’s like acres and acres of stuff. So, we went over to where the file cabinets were, and so we’re like “Well, I guess we could buy some file cabinets that we could put these reels of microfilm in,” and what we ended up getting were … stone-lined, fireproof file cabinets … So, we somehow manhandled them onto the back of my pickup truck and brought them over to the Social Science Tower, and we had a dolly of some kind, and I remember they just barely fit in through the elevator, and only one of us could ride up with them at a time, because if we had more than one person, then we’d over-weigh the elevator, and the door wouldn’t even close, just this alarm would go off. So, we got them up to the history department and out onto the hallwy, and shoehorned them down to that room in the southwest corner of the history department.

We had this big discussion about a coffee-maker. … I called around, and there was a restaurant supply place over past Como Avenue, they had a used Bunn commercial restaurant coffee-maker, and I went over there on my bicycle, and I hauled the thing back strapped to the back of my bike!

Story and interviews by Diana Magnuson.