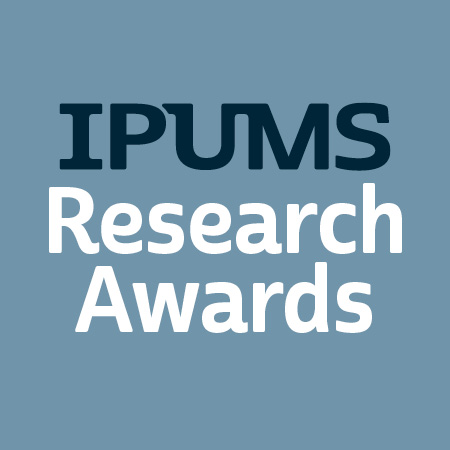 IPUMS is excited to announce the winners of its annual IPUMS Research Awards. These awards honor the best published research and self-nominated graduate student papers from 2017 that used IPUMS data to advance or deepen our understanding of social and demographic processes.

Over 2,000 publications based on IPUMS data appeared in journals, magazines, and newspapers worldwide last year. From these publications and from self-nominated graduate student papers, the award committees selected the 2017 honorees.

Marcella Alsan and Marianna Wanamaker. “Tuskegee and the Health of Black Men.” The Quarterly Journal of Economics 133(1): 407-455.

Alsan and Wanamaker’s innovative research combines 1969-1977 NHIS data with other data sources to estimate that the mistrust in the medical system fostered by the 1972 disclosure of the Tuskegee Study of Untreated Syphilis in the Negro Male substantially decreased health care utilization by black men and accounted for large portions of the 1980 black-white life expectancy gap among men and the male-female gap among blacks.

Ho used 1992-2011 linked NHIS-LMF data to investigate the contribution of drug overdose fatalities to the well-established educational gradient in mortality. While the years of life lost due to drug overdose increased for both men and women and across all educational levels, Ho found that they increased most for non-Hispanic whites aged 30-60, and that the increase was most rapid for women.

King leverages the linked NHIS mortality data in her dissertation to investigate the social determinants of the black-white disparity in a leading cause of death in the United States: motor vehicle accidents. She found that poverty, marriage, and education explain away the black disadvantage in motor vehicle fatalities.

Wilde, Apouey, and Jung combine IPUMS International census microdata with temperature data and supplemental health data to model the effects of temperature shocks during conception and early pregnancy on later life outcomes. They use individual level information on place and timing of birth as well as the fully harmonized geographic units and corresponding GIS shapefiles to take full advantage of their data on temperature shocks.

He combines data from multiple sources to examine the impact of trade liberalization on real wages of individuals by developing a framework that accounts for changes in nominal wages as well as changes in consumer price indices. Using the flexibility of IPUMS International microdata to fuel the supply side of the model, He is able to disaggregate effects on real wages for people at different wage levels. Findings contradict those of less robust models suggesting that real-wage inequality falls in all areas with trade liberalization.

Logan and Parman develop a much more subtle measure of segregation that was previously impossible and come up with results that contradict the trends and regional differentials that have been found using conventional measures.

The fertility boom that social scientists predicted would accompany the rebound following the 2007-2009 economic recession and housing crisis has yet to materialize. Seltzer’s paper makes innovative use of IPUMS USA data to examine how structural changes in industry composition have had a larger depressive impact on TFR than more volatile shifts in general unemployment.

Combining annual nitrogen dioxide concentrations with NHGIS geographically standardized time series for census block groups from 2000-2010, Clark, Millet, and Marshall find persistent relative disparities in NO2 exposure between nonwhites and whites throughout the U.S., even while overall NO2 exposure and absolute disparities decreased.

Congratulations to all our winners, and thank you to everyone who submitted their work. Next year’s award process will open in November 2018. To see previous award winners, visit ipums.org/awardwinners.