The Twin Cities’ Racial Gap in Homeownership Has Grown 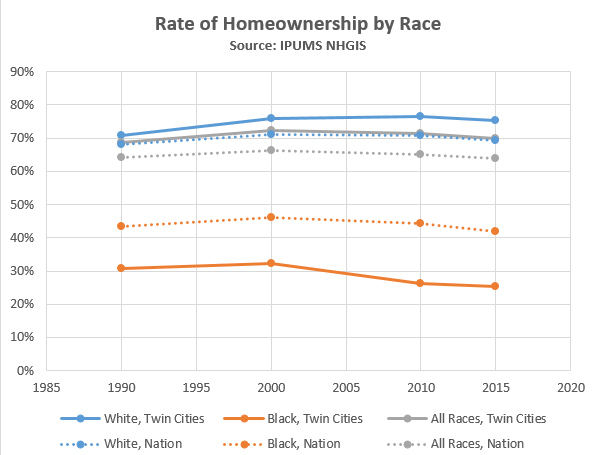 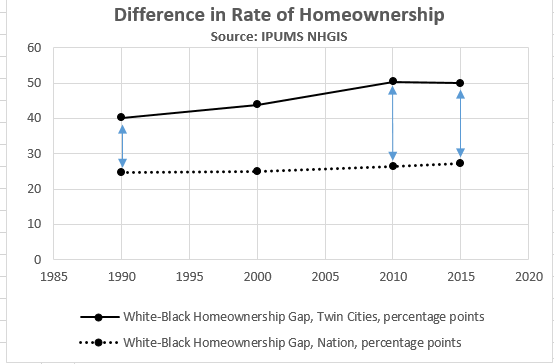 The gap in homeownership between white and black householders in the Twin Cities grew most between 2000 and 2010, coincident with the 2008 housing crisis and recession.

The Context of the Twin Cities

The Twin Cities metro area has proportionally fewer black householders (7%) than the nation as a whole (12%), although the metro area is becoming more racially diverse and more representative of national trends over time. The proportion of Twin Cities households with a white householder declined by 9 percentage points since 1990, down to 85% in 2013-2017, bringing it closer to the national rate of 77%. 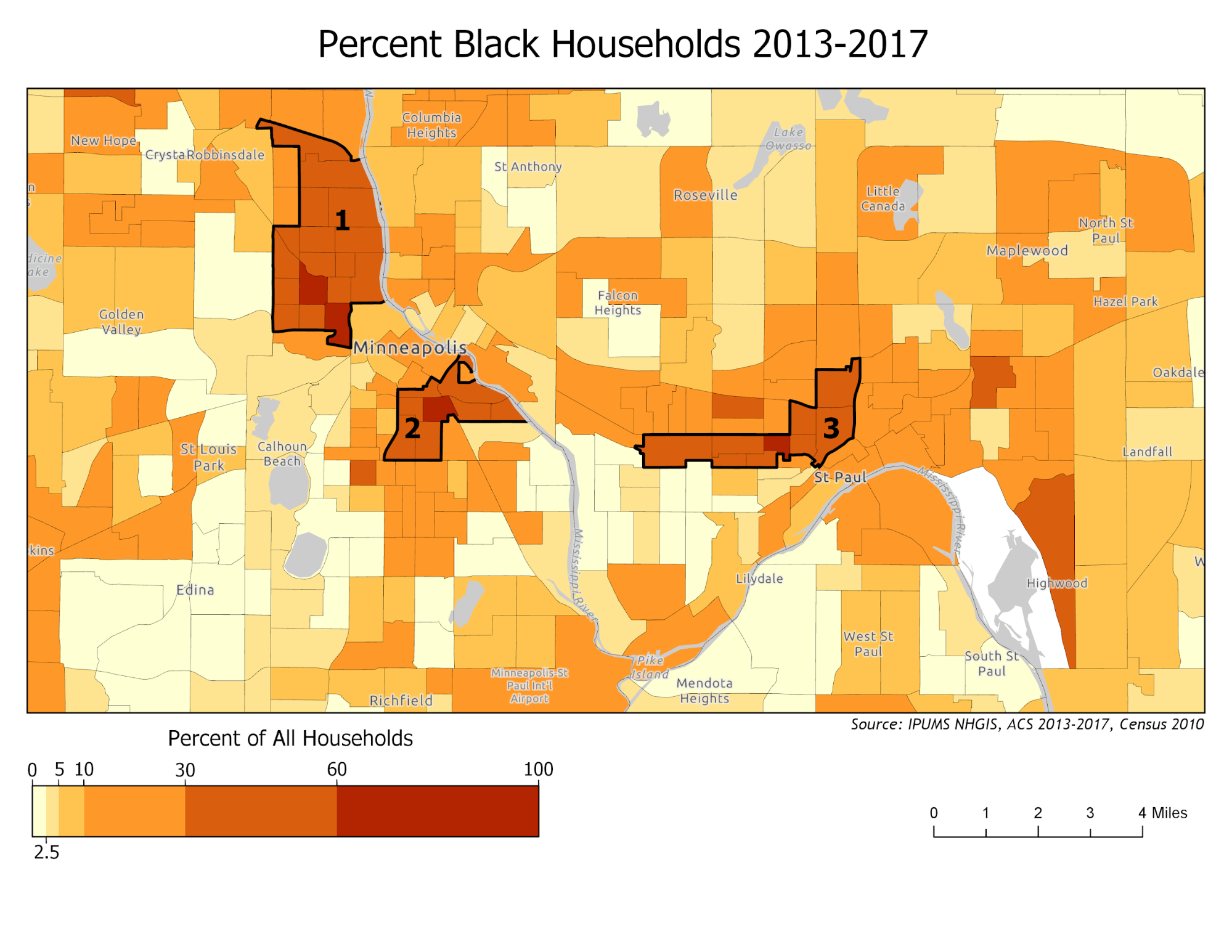 There are only three clusters of census tracts with a high (>30%) percentage of black householders. These clusters are labeled on the map above as 1 (Near North and Camden neighborhoods), 2 (Phillips, Seward, and Cedar-Riverside neighborhoods) and 3 (Frogtown, Rondo, and Summit/University neighborhoods).

Given the relatively low population of black households in some locations, not all homeownership rate changes visualized in these maps can be considered significant. For this reason, we have chosen to focus only on specific neighborhoods for some of the maps below. 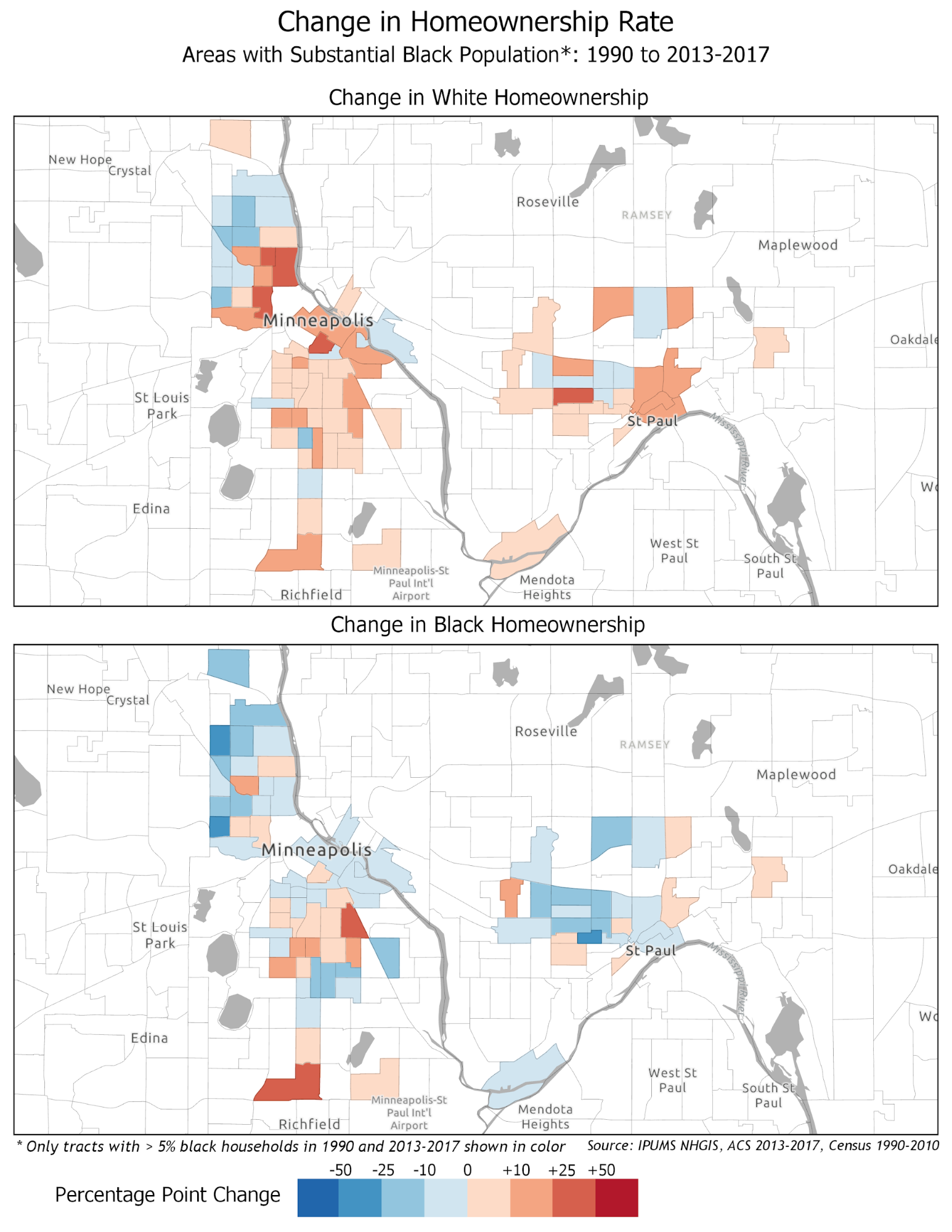 Further Exploration on Homeownership and Race in the Twin Cities

There are many resources available to continue exploring the relationships between homeownership and race in the Twin Cities. The effect of the late 2000s housing market and foreclosure crisis on homeownership trends cannot be understated. The history of redlining and discriminatory lending also provides important context.

Some relevant resources include:

Mapping Prejudice, a project on the history of racial covenants in the Twin Cities

NHGIS time series tables provide easy access to census information with harmonized measures and geography for different time periods. For more information on how to use this unique data product, visit https://www.nhgis.org or proceed directly to the NHGIS documentation on time series tables.