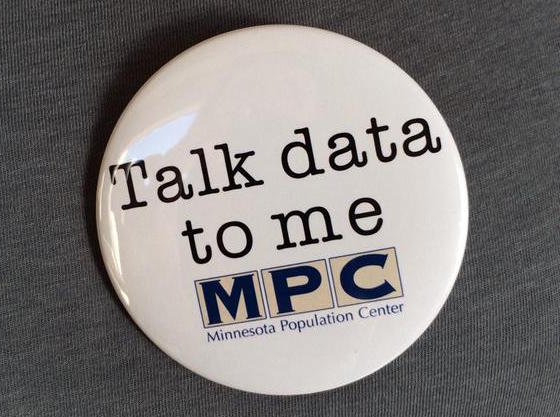 One of the defining characteristics of the MPC in its sixteen-year history is the longevity of its staff. Why do people stay? The oral histories reveal several recurring themes that help to explain this longevity: love of numbers, engaging intellectual challenges, and affirmation that one is contributing significantly to our social science infrastructure. A steady supply of coffee and weekly brouhahas might also have something to do with it.

The MPC is a safe space for self-identified data nerds. Ron Goeken, MPC Research Scientist and Data Services Manager, is one of the employees with the longest tenure at the MPC. Goeken began working for Steven Ruggles as a graduate student in the fall of 1987.

Numbers in general interest me, have always interested me…I was always naturally inclined to either count things or identify discrepancies, inconsistencies, stuff like that. That’s just my personality. Doing it on a more formal basis like this, it’s great…But in general I love the data, just love it.

Trent Alexander is a statistician and assistant center chief at the U.S. Census Bureau. Alexander worked at MPC from 2001-2010. He explained that he found his tribe when he arrived in Minnesota in 2001:

It felt like just complete support for the kind of things that interested me and just kind of blew my mind with all the ideas that everybody had about everything. So I was kind of a half qualitative, half quantitative, I think, in my dissertation and in graduate school, that’s how I saw myself developing, whereas when I got to Minnesota, it was all quantitative—I mean all quantitative in a way that I really liked and I think I wanted all along. I realized I should’ve gone to graduate school there and was really happy to be a post-doc there for that reason.

When a whole lot of data-loving nerds get together around engaging intellectual challenges, there is a unique kind of energy. Monty Hindman is currently employed as a software engineer for Apple. He worked at the MPC from 2004-2011.

For Sarah Flood, a research scientist who began at the MPC in 2004, the intellectual challenge is tackling big, complex systems.

I think about my work as a puzzle. If there’s a problem, I can track it down. But, you’ve got to understand how the pieces are connected to track down the problem. So, it’s interesting. I think at MPC there’s a lot of latitude to make contributions that no one ever imagined because people are willing to hear new ideas.

The freedom to explore new solutions to problems in collaboration with others contributes to staff longevity. Dave Van Riper started at the MPC as a graduate student in 2001 and became a full-time employee in 2005. Currently the spatial analysis director, Van Riper notes:

I think the most important thing that’s kept me here is that the environment is great…Making data is the key component of what we’re doing and if I was a faculty member in a department, the only person doing what I’m doing, I wouldn’t be able to go walk down the hall and talk to somebody about this technical problem that I’ve got. Here, I’ve got my choice. Which person do I want to talk about this? …We’re all in the weeds all the time, and it’s just fun to come to a place where there’s that many people working on this really cool data.

You’ve got people who are in it for the intellectual stimulation, not just the money. So you get to explore these things. You get to go to Peru and give talks. The variety has been so fantastic. Just the freedom to design these projects the way that you see fit. That’s kept me here for a very long time and kept me engaged in what we’re doing. I tell people all the time, “If you would’ve told me in 2001 that I’d still be living in Minneapolis/St. Paul working at the University, I would’ve said you were crazy.” I never expected that to happen. Period.

Longevity is also a byproduct of making a significant and lasting contribution to the world’s social science infrastructure. Interviewees repeatedly commented on the importance of their work to the “greater social good.” Van Riper notes, “There is no other place I could work at that would let me have that type of nationwide and global perspective. That just does not exist I don’t think out there in the world.”

Patricia Kelly Hall, whose involvement with the data integration projects began as a graduate student in 1994, stressed the importance of the work for others globally. A long-time contributor to the work of IPUMS-International—an effort to inventory, preserve, harmonize, and disseminate census microdata from around the world—Hall movingly described the significance of the MPC in developing partnerships with countries that do not have the luxury of an enormous census bureau to preserve and disseminate census data. IPUMS International, Hall says, is “saving data that would be lost. We’re resurrecting data that are literally sitting in sand filled storerooms.”