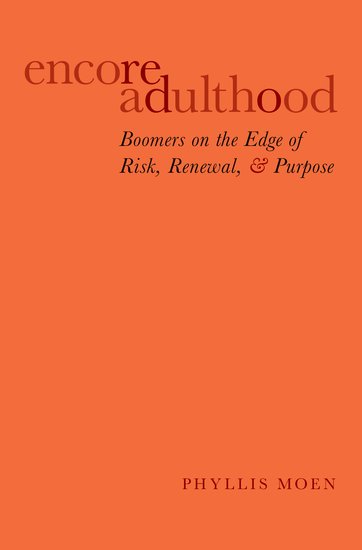 We all know about what Phyllis Moen calls the linear lockstep life path: first learning, then working for advancement (or at least security), then retirement. What happens when this traditional path no longer fits the realities of most people’s lives?

This traditional path no longer fits contemporary experience, as workers need time for family or personal care, want a life as well as a job, find themselves suddenly laid off, require a skill update to compete in today’s labor market. Moreover “retirement-eligible” workers confront both the benefits and economic/health risks of living longer.

Various media outlets have been reporting on Millennials’ lack of interest in full-time work. One article from Time discusses how “instead of following traditional career paths, they are using part-time pay to help them pursue some version of the popular vision to follow your passion or “do what you love” during the hours they’re not on the clock.”

As those Millennials contemplate or actually move into parenthood, there are reports that the discontent with traditional employment continues. A survey of 10,000 workers in eight countries by Ernst & Young’s Global Generations Research as reported by the Washington Post found that “40 percent of young workers, male or female, in the United States are so unhappy with the lack of paid parental-leave policies that they say they would be willing to move to another country.”

Moen, in her new book Encore Adulthood, finds the traditional lock-step path no longer fits with Boomers either. The title signals what Moen argues is a new life stage, “sandwiched between the traditional careers/childrearing years and the debilities associated with old age.” Moen writes that the bonus years of life expectancy due to medical advancements and lifestyle changes are coming not at the end of life but sometime between the ages of 55 and 75.

Moen says, “What we have are fundamental mismatches between the outdated ways the clock and calendars of work are organized, technological advances and global competition increasing job insecurity and risks of layoffs, a minimal safety net, and the real-life circumstances of workers and their families.”

This problem with the clockworks of work is not new. The linear lock-step life course, Moen explains, “was based on the orderly career tracks of white middle-class and unionized blue-collar men in the middle of the last century.” The notion of a lock-step was created during a very specific time, and only worked for a specific group of people. Even in the 1950s and 60s, it did not work for women who were expected to do unpaid family care; nor did if work for minority, immigrant, or poorly educated men and women who found stable career paths out of their reach. Yet, Moen explains, the lock-step image became the accepted reality, “This is what we took as the American Dream, the (only) path to success. Like white men, many women, minorities, immigrants and low-educated people aspired to the security and rewards it promised. Our laws and policies assume full-time continuous work throughout adulthood, and that with seniority comes security. This path is etched into our mindsets and expectations, even though it no longer fits the contemporary experience.”

But expectations are changing, for workers at all ages. Moen says, “work today feels riskier. Careers with one employer and stable ladders to climb are increasingly rare. For those at or near retirement age, being suddenly laid off is a real possibility. Older workers and younger retirees confront two choices, full-time work or ful- time retirement, when many want something in-between.”

Researching her book, Moen met and spoke with adults now experiencing encore adulthood. “They are not thinking of themselves as old. It’s a diverse group wanting second acts, but finding no ready-made scripts.” Boomers are more educated, feel healthier, and living longer than previous 50-, 60-, and 70-somethings. Not content to sit on the couch, Moen finds most Boomers want to remain engaged.

“They are seeking jobs or volunteer gigs that are both flexible and meaningful. Surveys show seventy percent of Boomers want to work, but the kinds of flexible jobs they want aren’t out there. We have a group of highly skilled workers, but no blueprint for how to use those skills in ways that can benefit both Boomers and society.” Moreover, she draws on Current Population Survey data to document the disparities in resources and risks at this life stage.

Moen has ideas for engaging older workers and retirees in ways that can benefit all generations. The clocks and calendars constraining work to certain times, places, and pathways are out of date. They were socially constructed by leaders and problem-solvers in the middle of the last century. But they can be redesigned in ways that promote flexibility for workers of all ages and life stages. All it takes is recognition of the need and the will to do so.“

Moen says this issue is not uniquely American. When asked if there are any countries that are doing this well, she comes back with a hard no. “Singapore has some policies. Leaders in countries with aging populations must come to terms with the changing nature of work and the aging of their workforces. Needed are an array of options, offering different ways of working, no longer a single lock-step path.”

As to who will tackle these changes, Moen suggests that leaders in governments, business organizations, and non-profits need to try out innovative ways of working. Colleges and universities can open up options for people of all ages to upgrade their skills or develop new expertise. All levels of government, which employs 15% of the U.S. workforce, could be models of reinvention for other employers.

“Boomers are still in positions of power. They should realize that what they want for themselves – flexible, meaningful options that can be encores to their conventional careers – are desired by their employees as well. They have the ability to reimagine and reset the clockworks of work and occupational paths in ways that benefit everyone.”