Did you know that the Current Population Survey (CPS) – an important source of information on unemployment, poverty, and many other topics – has a panel component? If you didn’t, you’re not alone. The CPS rotation pattern is complex and can be difficult to work with. In fact, IPUMS CPS has held multi-day workshops intended to introduce researchers to the CPS panel component, help them understand the rotation pattern, and show some convenient IPUMS CPS features that make working with CPS panel data a little easier. If you’re completely new to the CPS panel, check out the materials from our latest workshop!

Maybe you did know about the CPS panel component, but looked at the complex rotation pattern, the Census Bureau guidelines and linking keys, and decided that this was for the birds. If this sounds like you, then our newest IPUMS CPS feature may be right for you! IPUMS CPS users can now download CPS-ASEC panels that contain two observations per person across a one-year period as longitudinal extracts. The rest of this blog post will explain what you are getting when you make a CPS-ASEC longitudinal extract and will walk you through how to create one for yourself.

CPS Rotation Pattern and the ASEC

The CPS is a monthly labor force survey that includes roughly 70,000 households every month. Households included in the CPS follow a 4-8-4 rotation pattern – they are interviewed for four consecutive months, rotate out of the sample for the next eight months, and are then interviewed again for the next four months before rotating out of the sample for good. Every month, new households enter the survey, and some households already in the survey exit for good. This means that there is never perfect overlap between any months of the CPS. The IPUMS CPS RoPES tool is helpful for exploring the CPS rotation pattern, seeing which months can link to which months, and what fraction of respondents are expected to overlap across months based on the rotation pattern.

The Annual Social and Economic Supplement (ASEC), primarily collected in March, is a special CPS supplement that includes both more households and more variables than the Basic Monthly Survey (BMS). In addition to the households included in the BMS, the ASEC contains two oversamples – the Hispanic oversample (beginning in 1976) and the State Children’s Health Insurance Program (SCHIP) oversample (beginning in 2001). These oversampled households are drawn from non-March BMS months whose rotation pattern does not overlap with March. These oversample households, along with the March BMS households are asked the ASEC supplement questions, which cover topics like income, poverty, and health insurance coverage.

What is in a CPS-ASEC longitudinal extract?

As shown in RoPES, half of the respondents in any given month are eligible to link to that same month in the following year. The ASEC file includes all of the March BMS respondents, half of which are eligible to be included in the ASEC file from the following year. In other words, a portion of the records in the ASEC files can be linked across years!1 This fact allows researchers to observe, for example, short-term changes in income and health insurance coverage.

We are now offering users pre-linked extracts for ASEC files! CPS-ASEC longitudinal extracts are created by linking ASEC data using CPSIDP. A CPS-ASEC longitudinal extract contains only the person records found in both of the ASEC files, and the variables for these records at both time points. Just like any other IPUMS extract, you only pick the variables you want for your analysis. These data come in “wide” format, meaning each individual has one record in the linked extract file and each variable appears twice on each record, once for each time point.

How can I make a CPS-ASEC longitudinal extract?

To make a longitudinal extract, first select the “Longitudinal, 1 Year Apart” radio button on the IPUMS CPS sample selection page. Notice that each linked sample contains a pair of years. 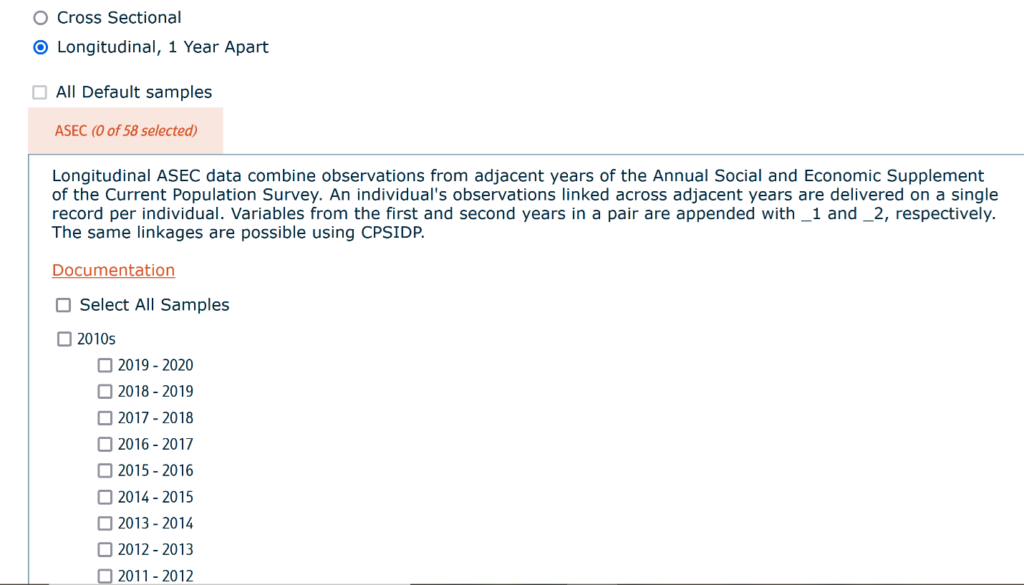 Once you have chosen your linked sample(s), variable selection works just as it would for single samples. Notice that now the variable availability grid refers to the pair of linked years of data as opposed to single years of data. In the event that a variable is only available in one of the two years in the linked ASEC sample you have chosen, a single “/” will appear in the variable availability grid. These variables will be empty at both time points in the CPS-ASEC longitudinal extract. For example, the Supplemental Poverty Measure (SPM) variables first become available in 2010. These variables will be missing for the ASEC 09-10 longitudinal dataset. 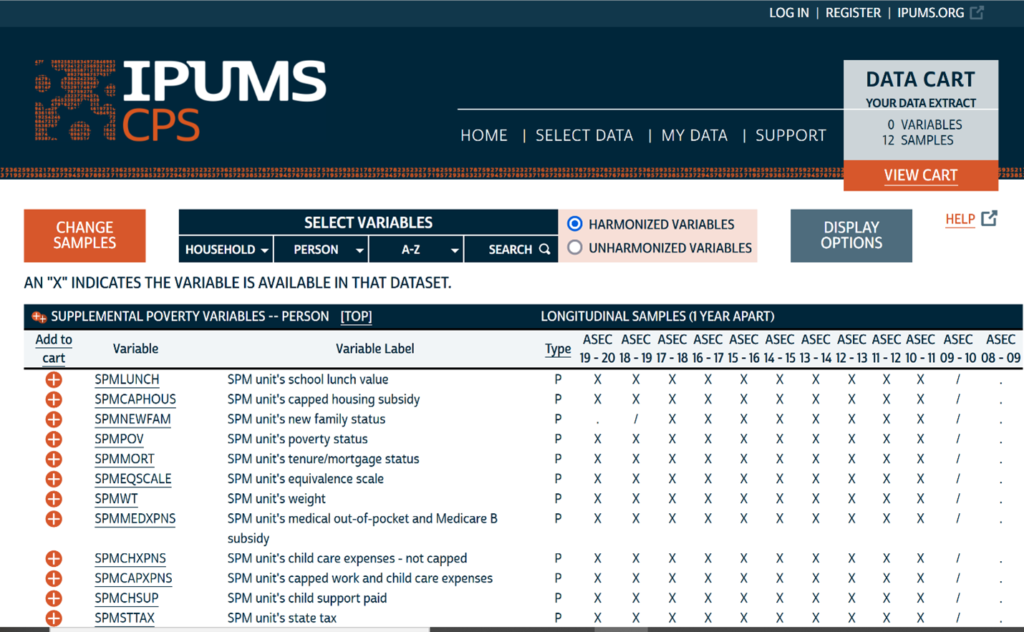 Longitudinal extracts come with syntax files and you can read them into your favorite stats package just as you would a cross-sectional extract.

Remember that each record represents a single person who appears in the ASEC file in both years and note that each variable appears twice, once for the first year, with an _1 suffix and once for the second year with an _2 suffix. And just like that you’re ready to start analyzing change over time in the ASEC data!