“25 Years of IPUMS Data,” the current IPUMS/MPC archive exhibit, highlights a dynamic quarter center history of data innovation at the University of Minnesota. In the late 1980s, the Social History Research Laboratory at the University of Minnesota’s History Department proposed “the creation of a single integrated microdata series composed of public use samples for every year … with the exception of the 1890 census, which was destroyed by fire.”  The primary aim was to make the U.S. census microdata “as compatible over time as possible while losing little, if any, of the detail in the original datasets” (Integrated Public Use Microdata Series: A Prospectus). 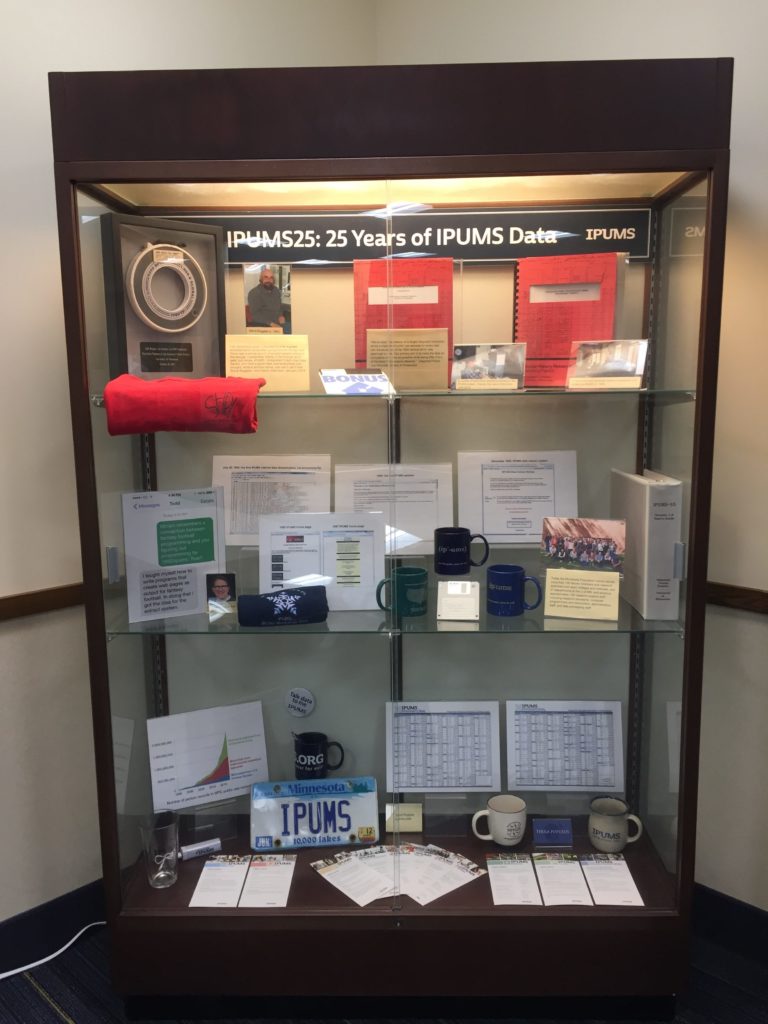 Steve Ruggles, Director of the Institute for Social Research and Data Innovation, recalled, “When I decided to write a grant proposal, I remember going into the lounge and there was a whole bunch of project people sitting in the lounge…and I said, you know, IPUMS—Integrated Public Use Data Series, isn’t that a great idea? And everybody just thought, what a terrible name, you can’t call it that” (Steve Ruggles, oral history interview, January 2014). Terrible or not, after a brief quandary over pronunciation (Ī-pŭms or Ĭ-pŭms), the name has stuck and is now synonymous with social research, data innovation, and free access.

With funding from both the University of Minnesota and the National Science Foundation, the Social History Research Laboratory converted existing public use samples of the U.S. census from 1880 to 1980 (excluding 1890) into a single coherent series with extensive documentation. In the two decades following the beta-test version of IPUMS in 1993, IPUMS has grown to serve over 100,000 researchers worldwide.

The exhibit highlights these developments through the display of artifacts central to IPUMS’ history. On display are photographs, original grant documents, examples of evolving data storage media, and the first iteration of the IPUMS User’s Guide. Promotional swag shown ranges from mugs to winter scarves to “Powered by IPUMS” phone chargers.